IMPORTANT : our team made our best in order to keep backward compatibility, but some migration of projects would still be required because of these large-scale improvements. Unfortunately it is the price of the progress. If you have a project, that is almost ready for release, it is strongly recommended to keep using UNIGINE 2.5 with old workflow.

Initially introduced with UNIGINE 2.3 as an experimental feature, the UnigineEditor 2 is now ready for the production use. It took 2 years of work for our tools team to re-do the editor from scratch, and they did it well! The key goals were more productive assets workflow for 3D content creators and ease of use for new users. 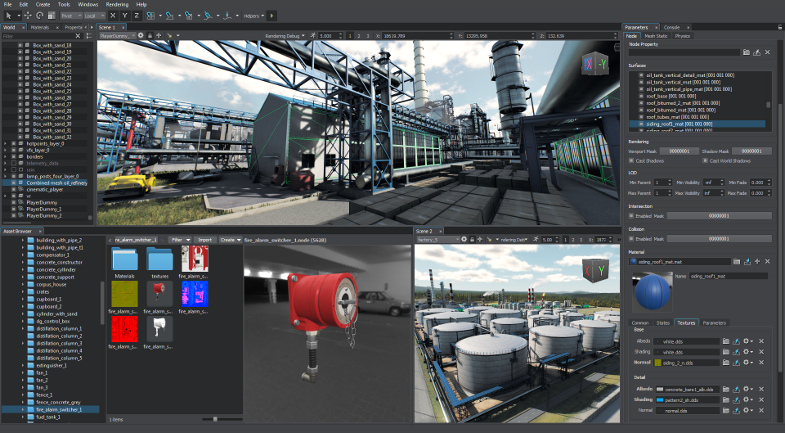 The core of the editor is re-designed and re-written from scratch in C++ with the use of Qt widgets, providing native look and feel on every operating system.

Asset is a new abstraction introduced in UNIGINE 2.6, it represents any item that can be used in your world or project. An asset may come from a file created using a third-party application, such as a 3D model, an audio file, an image, or any other type supported by the UNIGINE Engine.

Asset Browser is a modern tool that is used to organize content in your project: create, import, view, rename you resources (assets), move them between the folders and manage their hierarchy. Now you don’t have to worry that your material will lose a texture when you change its name. If you decide to move an asset to another folder within the project using drag-n-drop, context menu, or hotkeys (Ctrl+C, Ctrl+X, Ctrl+V) the asset system will keep all links and dependencies between the resources. 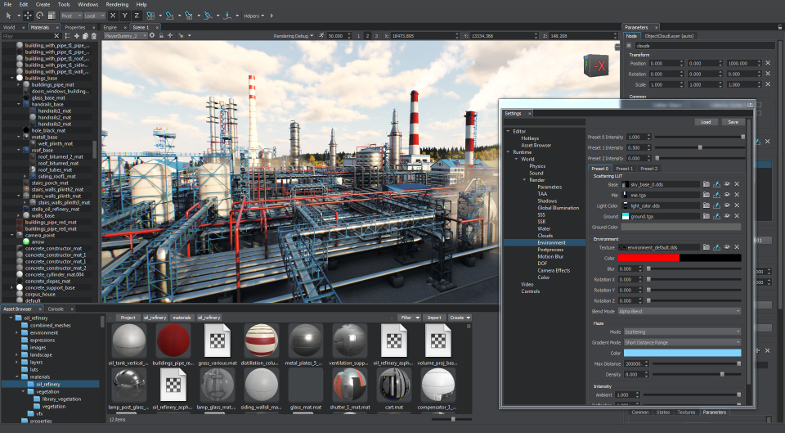 You can easily import content to the Asset Browser using drag-n-drop or the Import button, you can also put your resources to the assets folder of your project directly using the functions of your operating system. The Editor 2 will import new assets automatically. You can place your assets on the scene by just dragging their icons from the Asset Browser window to the viewport.

You don’t have to use the “uncompressed” folder for texture compression, all textures can be imported in convenient formats (such as .tga, .jpg, .png .hdr etc.).

If you want to assign a texture to some material, or a material to some mesh you can do that in several ways:

If an asset with the specified name exists in the project it will be shown while you type.

Old editor is considered obsolete and will be removed in further releases.

Re-written from scratch with both usability and performance in mind, Syncker 2 has become a C++ plugin, providing robust and reliable frame synchronization and offering a set of optimizations along with a powerful C++ API to tailor it to any customer’s needs.

Truly “smart” synchronization: different approaches used for static and dynamic objects, adjustable packet compression parameters, use of interpolation/extrapolation, different protocols (TCP/UDP) used for critical and non-critical messages, and a lot more. Add to this a flexible customization of the whole synchronization process, based on custom user messages. Instead of sending the whole bunch of transformation data for objects that can only be rotated or sending huge amounts of transformation data for all parts of complex objects, when their positions can be determined using just a handful of simple parameters, you can send a single quaternion or a set of parameters. 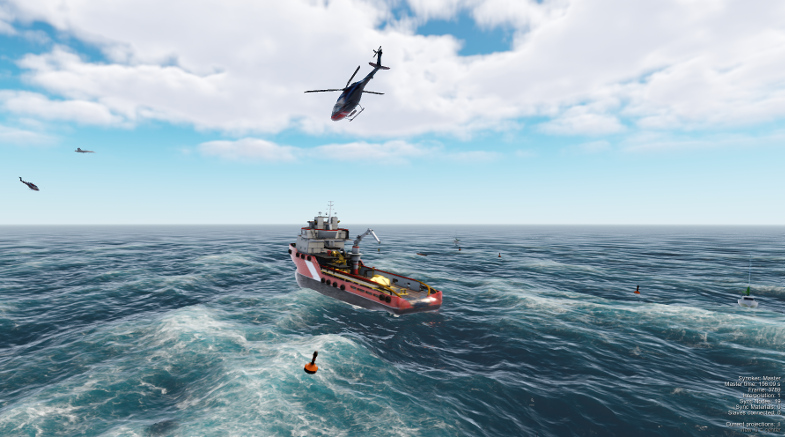 The order of launching master and slave applications does not matter anymore: you can launch several slaves, then the master, and then the rest of the slaves - synchronization will start automatically.

Syncker offers you an extreme flexibility of viewport configuration: you can use up to 6 monitors on a single slave, each having its own viewport assigned. Moreover, now it is possible to synchronize multiple cameras (e.g. a camera in the plane's cockpit and a ground-based surveillance camera). 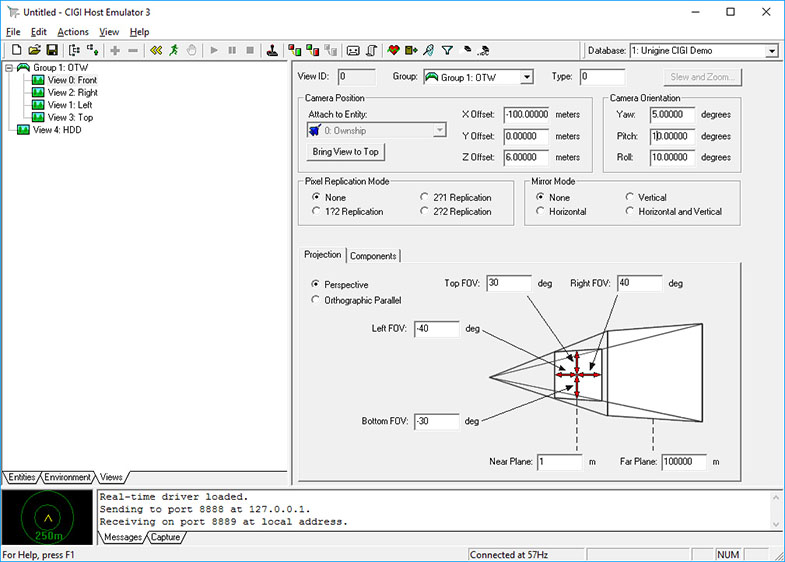 Instead of just receiving, parsing and sending packets it really does the job: automatically creates, modifies and deletes entities and controls articulated parts, changes views, responds to HAT/HOT/LOS request packets, etc. It also offers customization of processing of any type of CIGI Host packets (control, definition, request) via callbacks. On the top of that it is now possible to use Multi-IG configurations for visualization, that’s where the new Syncker plugin comes into play, providing reliable tight synchronization between the channels. 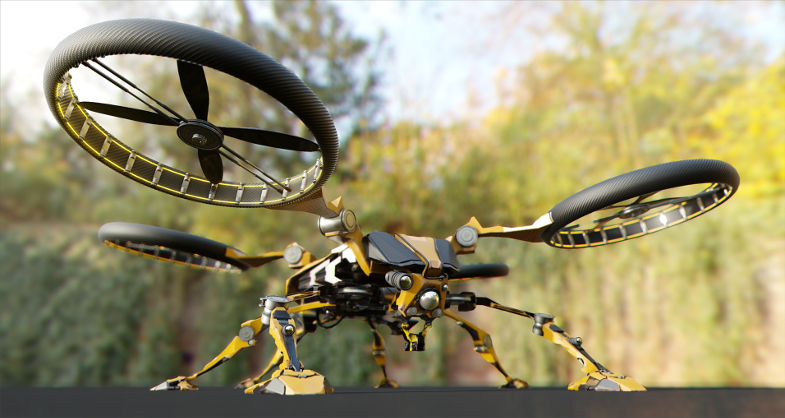 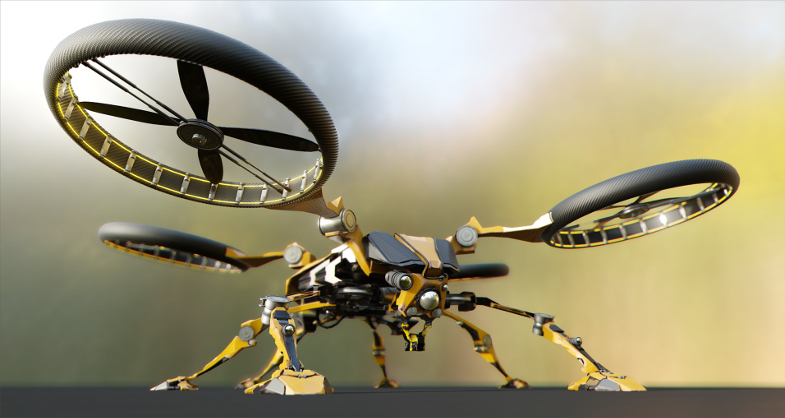 The Landscape Tool becomes more and more advanced with a lot of new features added.

Procedural placement of objects on the basis of vector data, be it buildings or fences, will save your artists a lot of time. All you have to do now is specify an object to be placed and define the locations via points, lines, or polygons in a vector data file.

Another powerful feature is the ability to generate masks, that can be used for details and vegetation, on the basis of landcover data available. As well as to procedurally refine these masks or create new ones, adding more realism to the final image, even if the quality of initial data is insufficient. 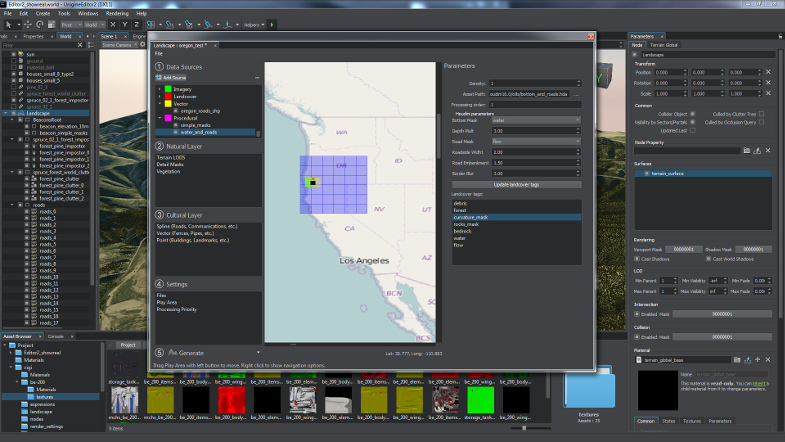 Procedural refinement system, makes it possible to drastically improve the visual quality of generated terrain using Houdini Digital Assets even in cases of insufficient resolution of GIS data sources. It can be used for:

Please note that in order to use this feature with Houdini digital assets you need to purchase (or rent) a commercial (Artists/Studios) license for Houdini Engine from the vendor.

Roads generation has been improved, now providing smoother transitions of geometry between the adjacent spline segments and better performance. You can now choose between generating roads using decals or geometry (when physical interaction is required), or you can combine them both, using visibility settings to enable geometry for near distances and decals for far distances.

Added C++ samples for SplineGraph and WorldSplineGraph classes illustrating how to manage spline graphs and generate geometry along the graph segments in stretching and tiling modes:

Introducing the new TerrainGlobal details system, serving to achieve a realistic visual representation of the global terrain. It offers a flexible mechanism of applying various detail layers (sand, stones, snow, etc.) to the terrain surface using masks. You can use the Landscape Tool to generate masks on the basis of landcover data (or any georeferenced 2D image). Or you can generate new masks using Landscape Tool’s new procedural refinement system. You even can specify a color of terrain surface to be used as a mask (e.g. to apply sand to yellow areas). Masks can be modified manually in the Editor with new terrain brushes. 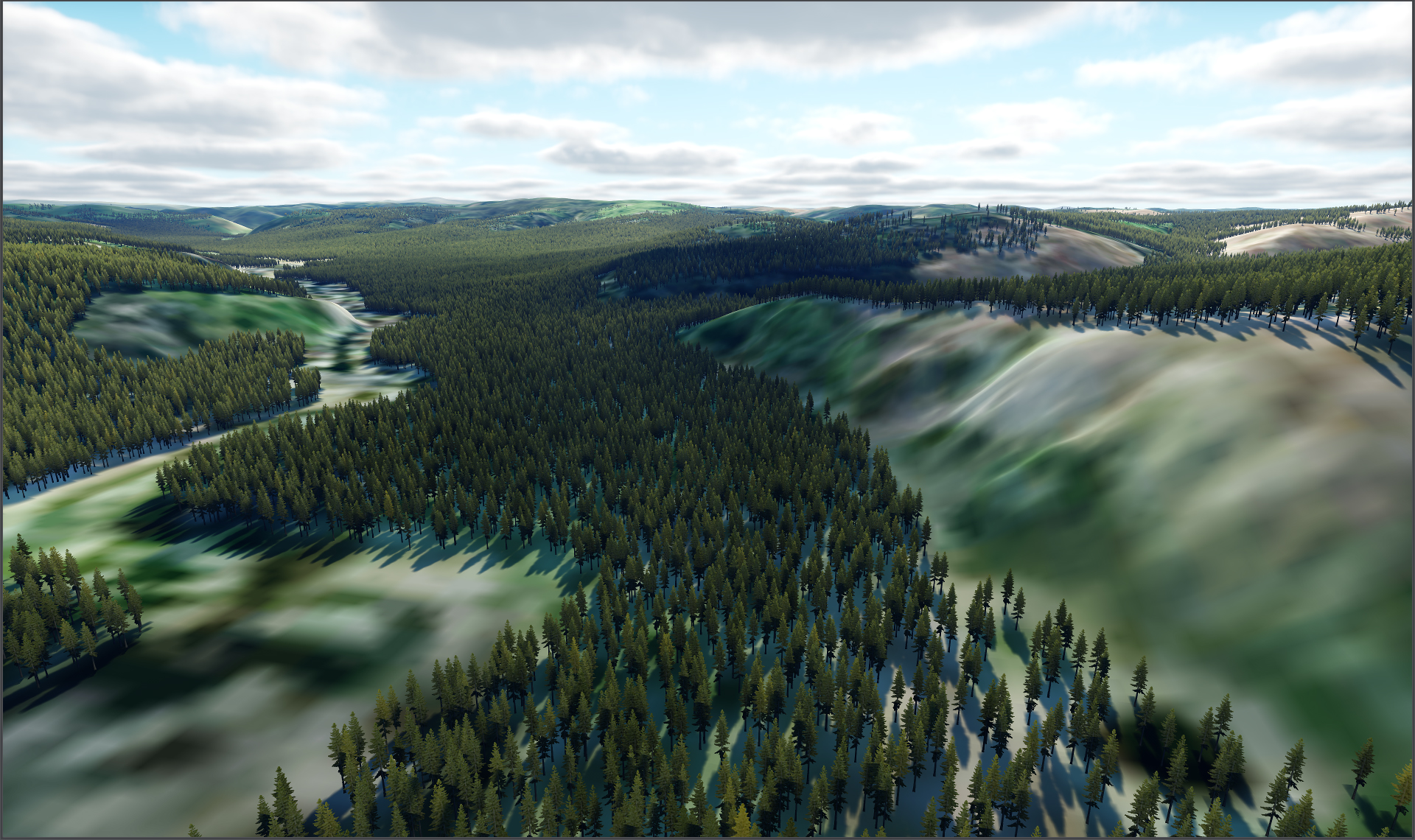 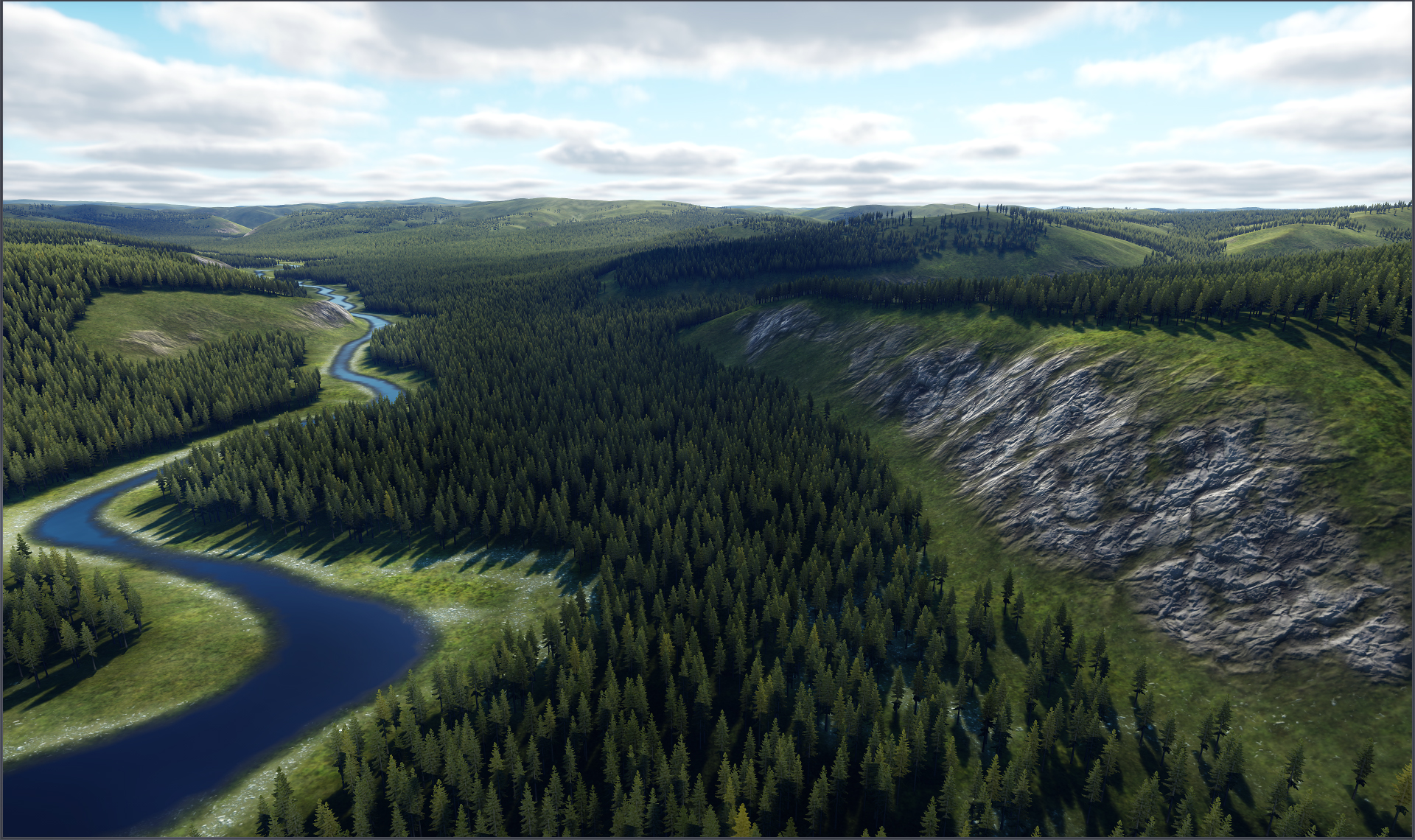 Moreover, all the benefits of LODs are now available for details – you can manage visibility settings to reduce tiling effect and gain performance. You can also adjust a mask to display a detail only within a certain range of heights. 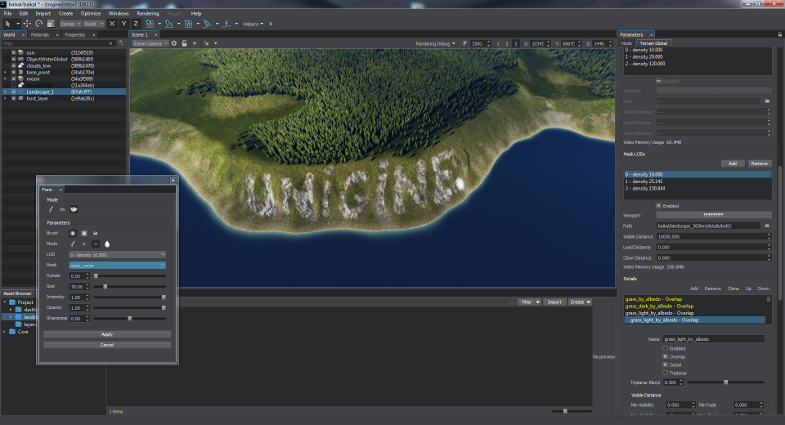 We have added configurable collision detection for the Global Terrain object making it possible to realistically simulate interaction with physical objects. You can now choose terrain LODs, that will be used for collision and intersection detection. You can also use masks to make collision/intersection even more selective. 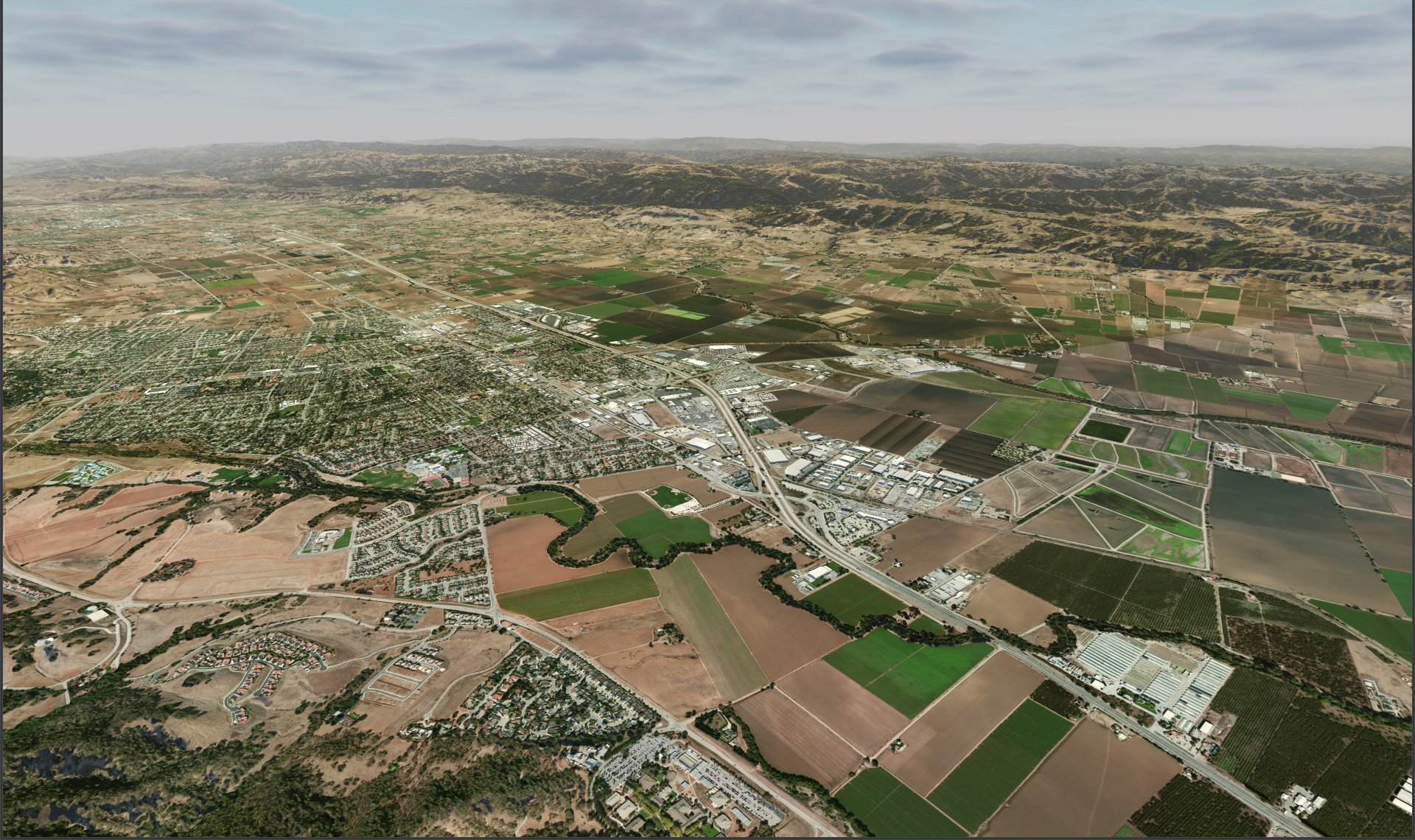 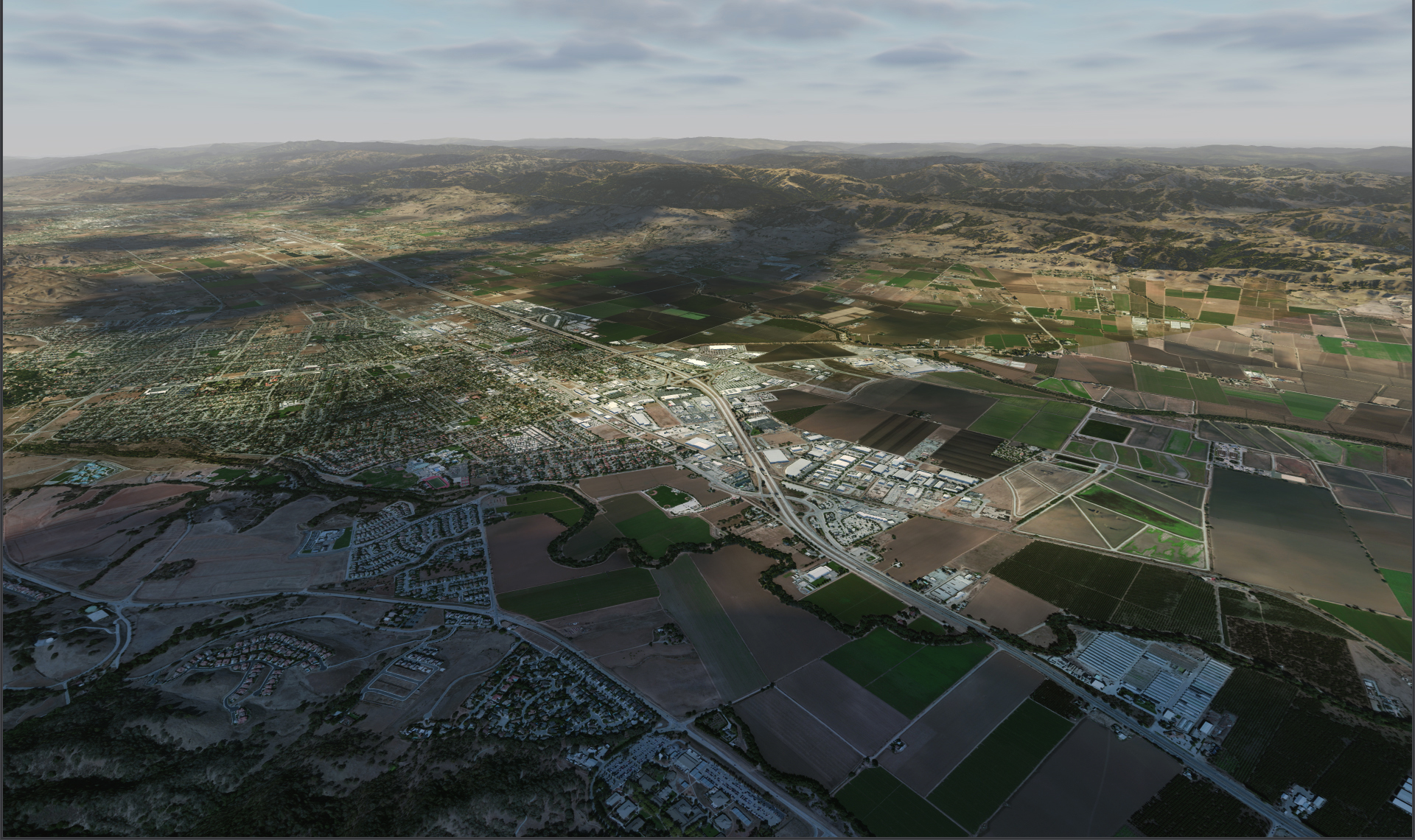 We refactored the Materials system, making the API clean and hierarchy management easier. All materials used in the project are now loaded on the engine start-up. You don’t have to worry about including material libraries anymore. Loading order of materials does not matter as well.

The main changes are as follows:

If a surface has no material assigned it will be rendered red. So, the old method of hiding the object to disable its rendering will not work. In this case it is recommended to use viewport masks (e.g. set the mask to 0).

We tried our best to minimize problems associated with content migration to Unigine 2.6. However, there may be cases, when manual migration of projects would still be required because of these large-scale improvements. We apologize for any possible inconvenience caused, but that’s the price of progress. For more detail on content migration please refer to the Content Migration Guide. 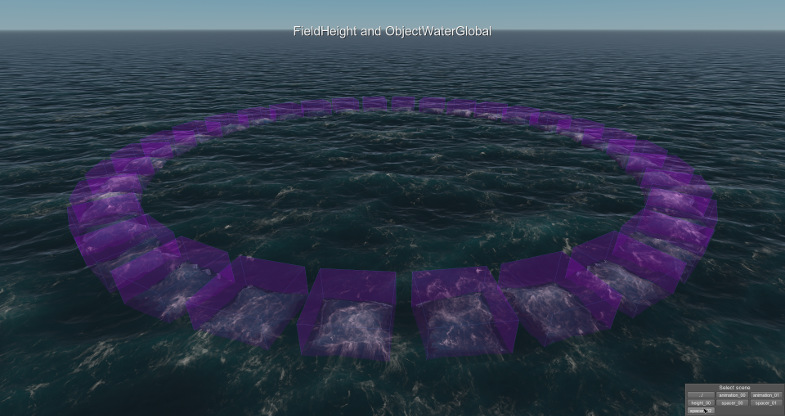 After the revolutionary SSRTGI technology, introduced in the previous release, we made some less fundamental but still important and useful improvements and fixes here. 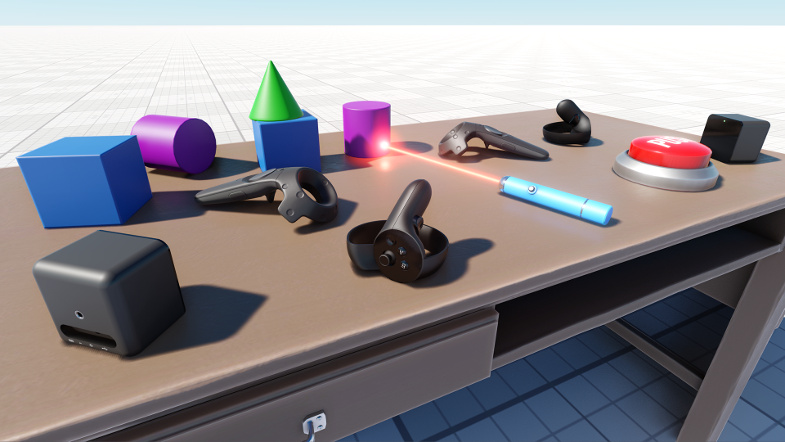 Use "Copy as Project" feature in the SDK Browser to quickly start creating your own VR applications based on this template.

We improved our file system to make it even more reliable, flexible and convenient. Each resource now has a GUID (globally unique identifier) which identifies a path to this resource. GUIDs offer more flexible management of assets, e.g., you can change a path to the resource while keeping the same GUID, etc. To manage GUIDs via API use the UGUID class.

Introducing a new “strict” feature. Of course, the fact that the file system understands partial paths is quite convenient, but sometimes you want to know whether the file with the specified name exists in the exact directory, not just somewhere inside the data. Now this is possible by simply setting the strict flag to tell the file system to check the exact file location.

Improved asynchronous resource loading queue. Loading of resources is now centralized: all async loaders from the Filesystem and World classes moved to the new AsyncQueue class.

All file-related methods will load a file and add it to the file system as a cached one.

engine.async.load* methods now return a unique id which can be used later to get the data.

Other file system improvements are as follows:

UNIGINE 2 can be embedded as a high-quality viewport into existing C++/C# application, e.g. a professional CAD system with a sophisticated GUI. This demo serves as an example of integration into the Qt application. You can control the viewport, select the scene, change various rendering presets and parameters via Qt widgets. 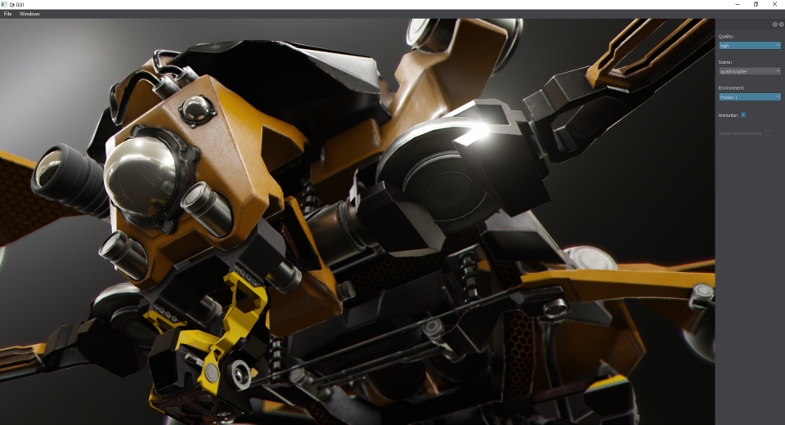 The demo offers the following features: 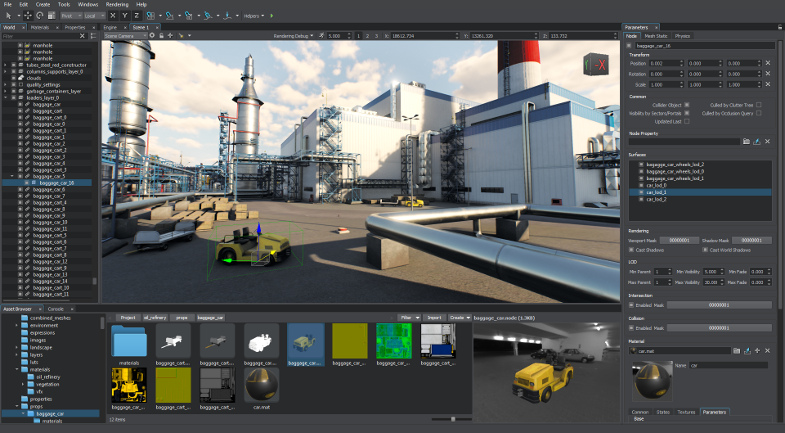 The End of macOS Support

UNIGINE 2.6 is going to be the last release with support for macOS platform. Unfortunately the pace of progress in terms of graphics on Mac is slower than on PC, not to mention a lot of existing issues and lack of important features. Based on our statistics there is virtually zero interest to VR applications on macOS from our current customers base, the same is true for new users.

Without the need to keep macOS restrictions in mind we can create better graphical features (both in terms of quality and performance). So long, macOS! 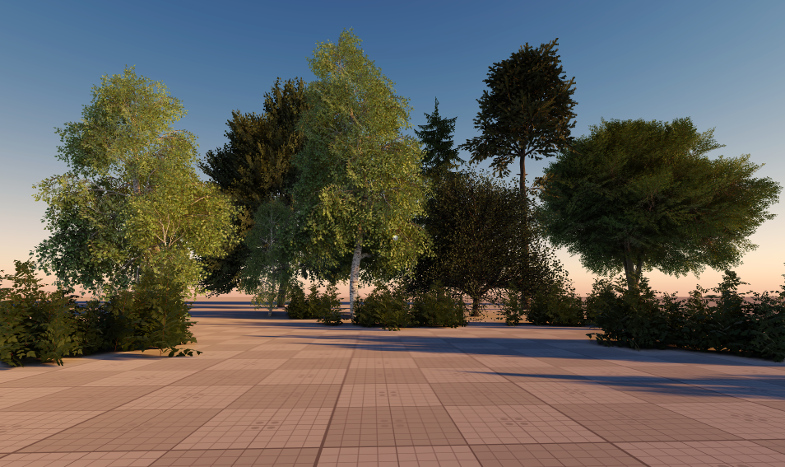 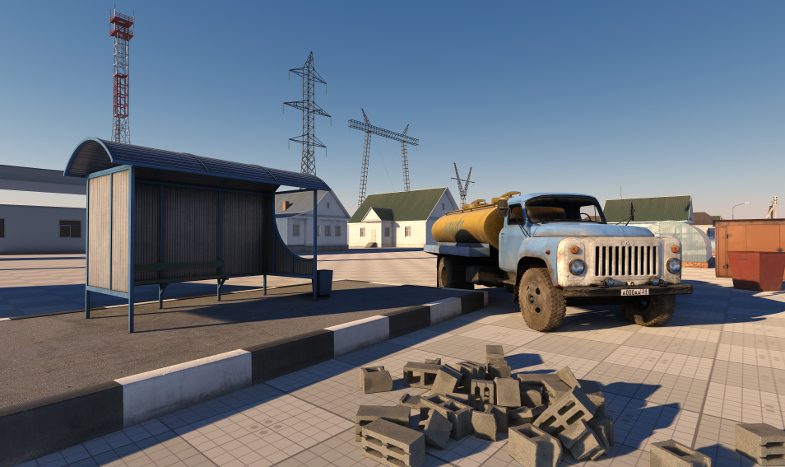 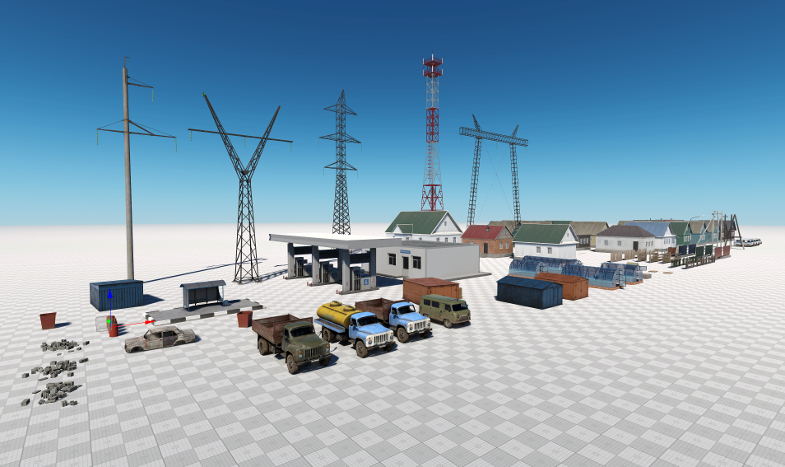 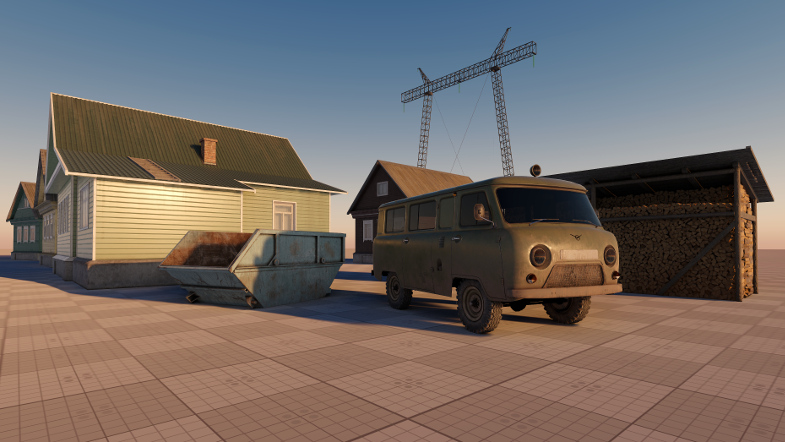 It allows to assemble scenes like this very fast: 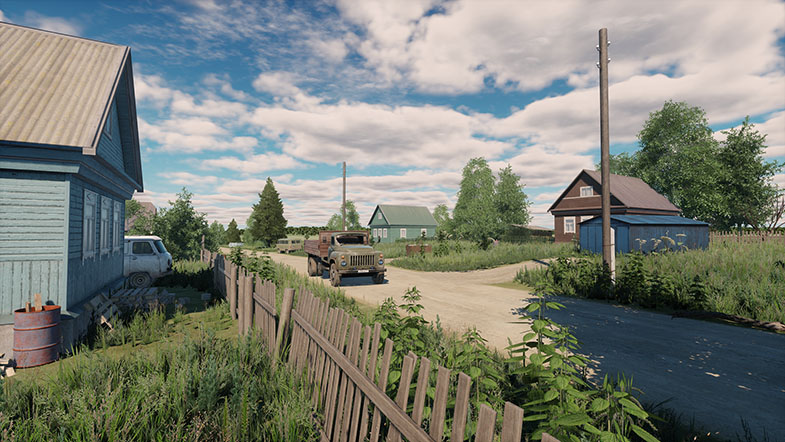 1. We have updated the license activation interface in the new version of the SDK Browser. Unfortunately, you will have to activate your SDK once again when updating SDK Browser to 1.8+. For each SDK after its installation via the SDKs tab the Activate button will appear. 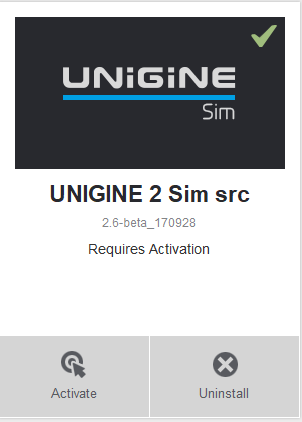 Click this button, select the desired license type and then click Activate. If you select Fixed License (Offline Activation) option follow the instructions to complete the activation.

After activation you can check the information about your license on the License info tab.

2. For UNIGINE SDK 2.6 (not available for previous versions): when creating a new project via the Create project button on the Projects tab, you can choose the version of the Editor to be used to modify the content of your project by selecting the corresponding option in the Workflow field. Note that projects for Editor1 and projects for Editor2 are not fully compatible without migration. 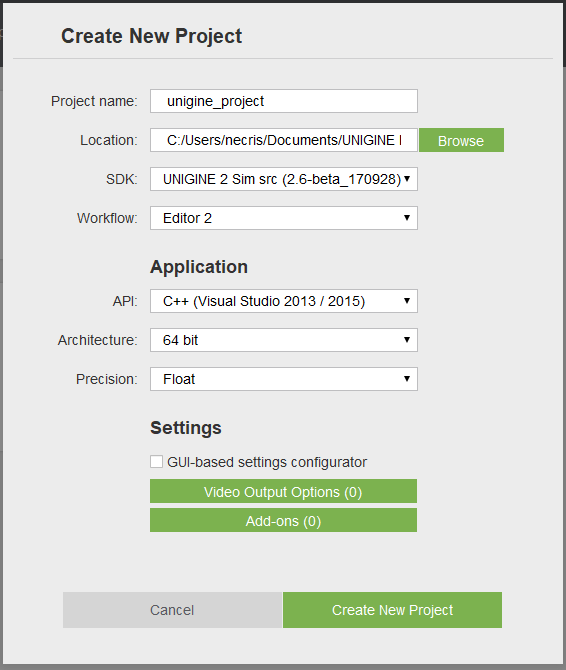 3. If you have a UNIGINE 2.5 SDK project using the Editor2, it will be migrated as an Editor1 project in the UNIGINE 2.6 SDK. No migration back to Editor2 workflow is possible for such projects in 2.6. 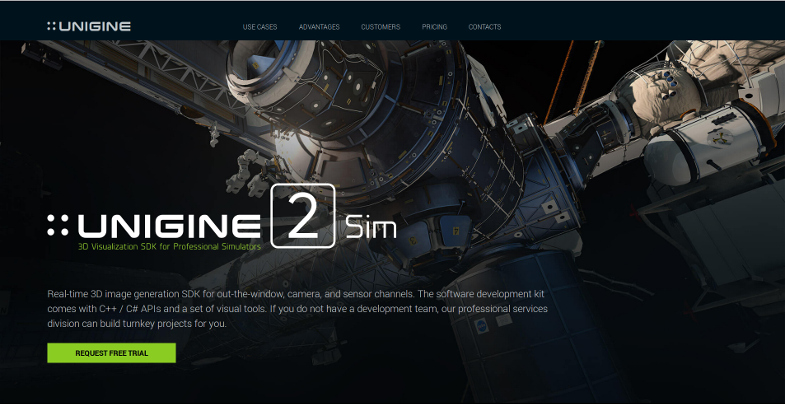