This is primarily a maintenance release resolving a number of issues introduced in 2.15 although it brings a pack of features and improvements.

You can now create materials for Decals via the Visual Material Graph Editor. All types of decals are supported (Mesh, Projected, and Orthographic). A set of new graph nodes has been added to the editor, these nodes are intended to be used for decals only and have the "decal_" prefix.

Adjustment of decal projection onto a surface has become more flexible. For example, for a Mesh Decal you can choose whether to take normals of the mesh into account or not, which is impossible to control via the decal_base material using the legacy workflow.

Decal samples were added to the Material Graph Samples demo included in the SDK.

The Material node has got a new input to control depth. This is widely used for impostors, for example. You can switch the mode from Offset to Override in the global settings in the right panel. 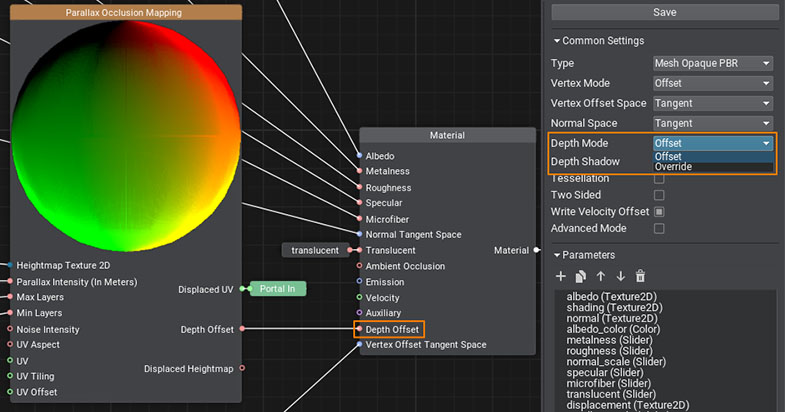 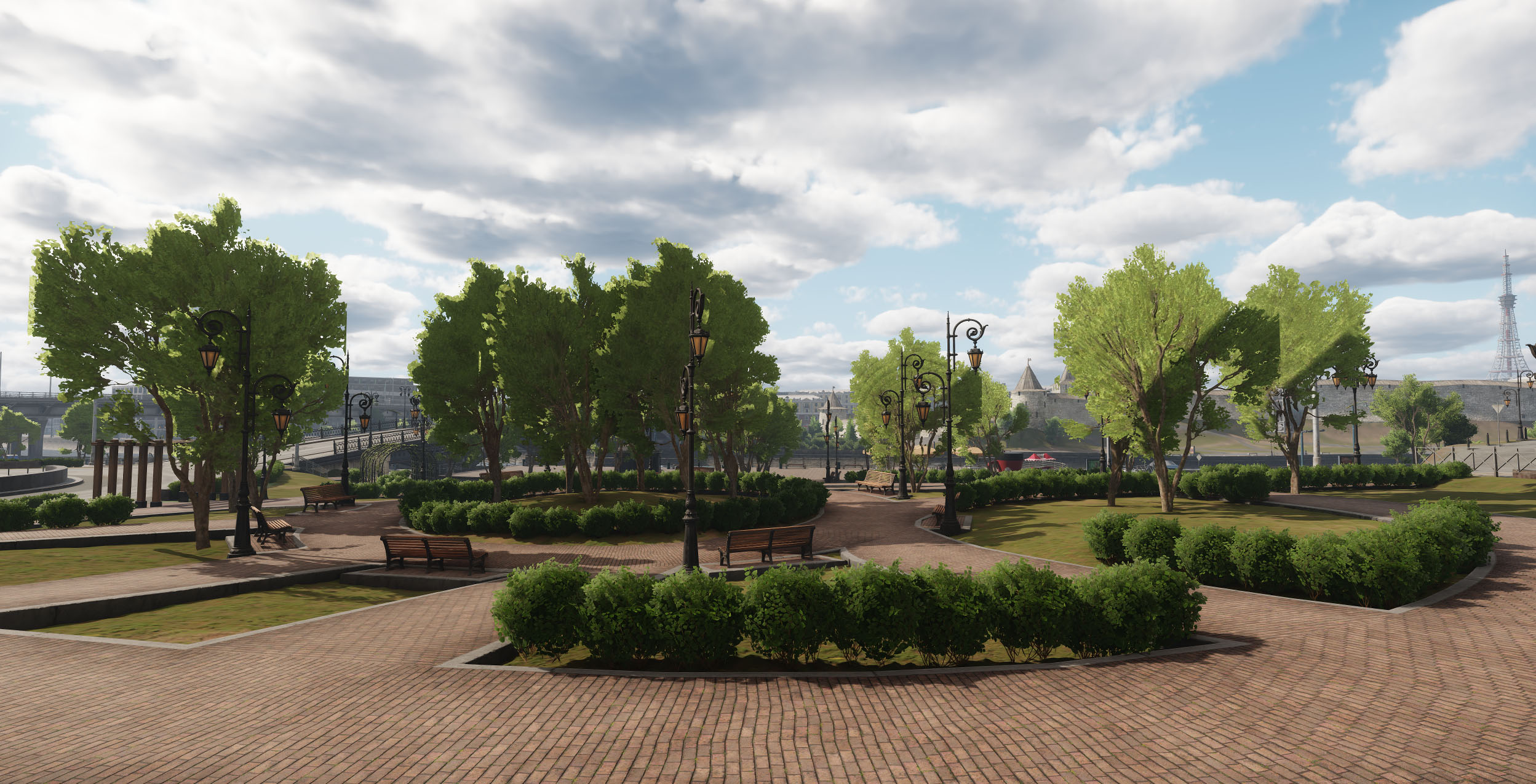 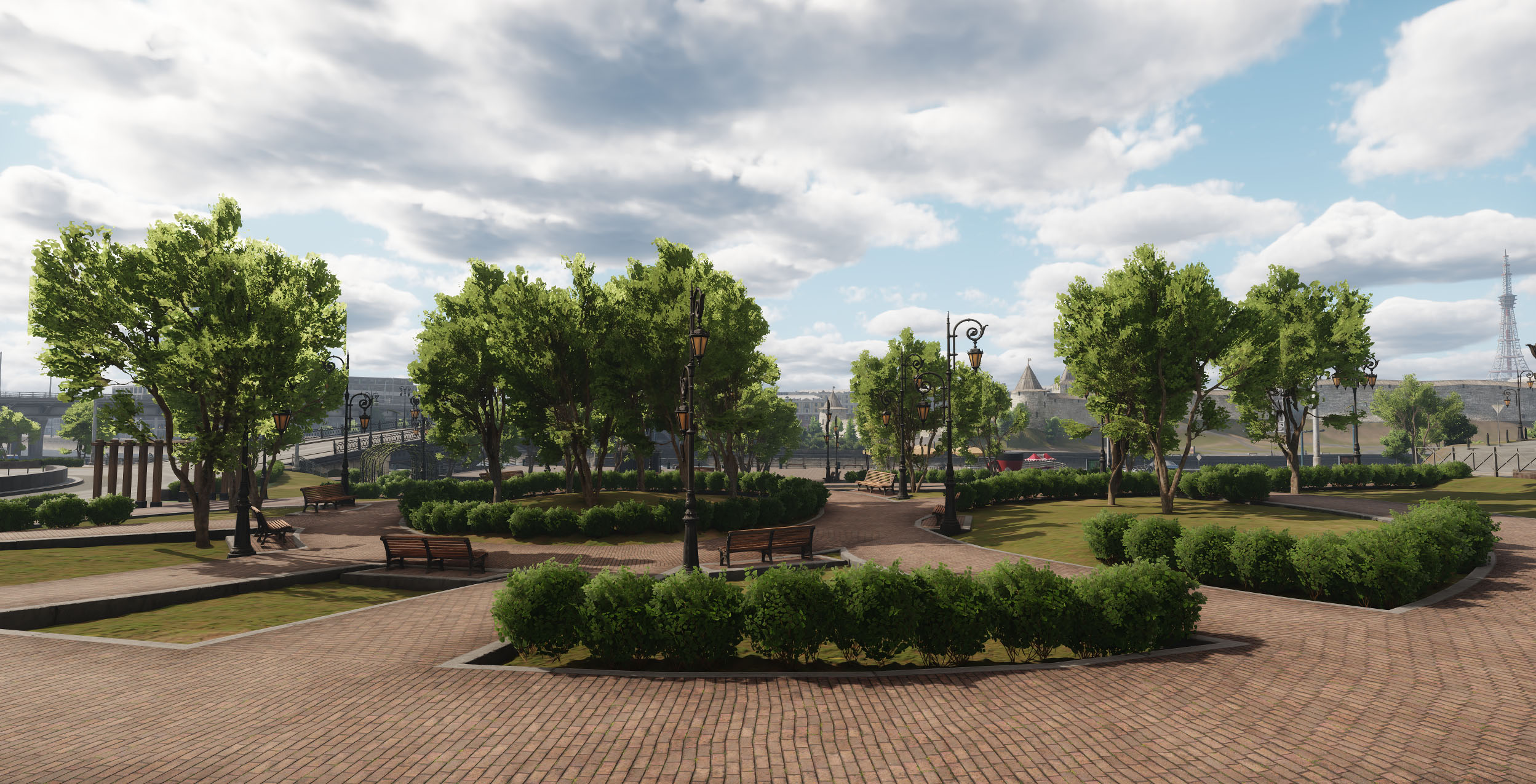 Inputs Constructor for Subgraphs and Loops

On double-clicking an Inputs node of a subgraph or a Loop Begin node you'll see a fully-functional Input Constructor. It enables you to rearrange, rename, delete existing inputs as well as implicitly set their type. 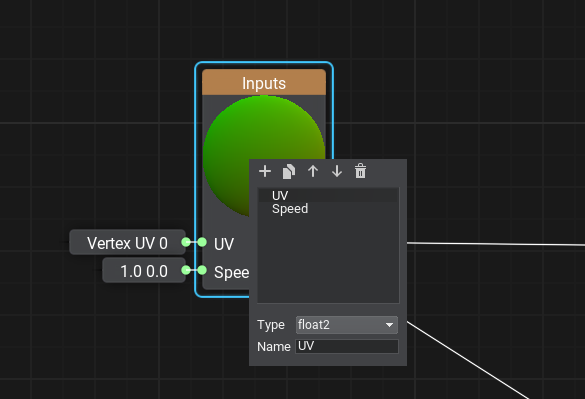 Not only API can change in the next Engine update, but subgraphs and graph nodes that you use in your graph-based materials can change as well.

To track these changes and provide you with timely notification if something has changed or went wrong and requires your attention we have added a new Warnings and Errors panel. 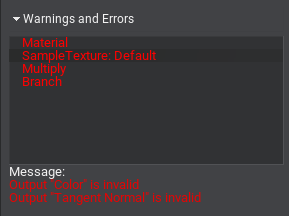 The panel lists all problem nodes in the graph (if any), just select an entry to see the details about ports or data in the Message section.

Automatic LOD Generation is now available right in the UnigineEditor, saving you a lot of time cause now you don't have to prepare levels of detail manually in some third-party software. The feature is based on the meshoptimizer library. You specify the number of LODs for your high-poly model, choose the degree of geometry simplification for each of them (Target Polycount), and set some other parameters, including visibility and fade distances - the Engine will do the rest, generating all LODs automatically using the specified settings. To use the feature choose Auto-Generated in the Use LODs dropdown. 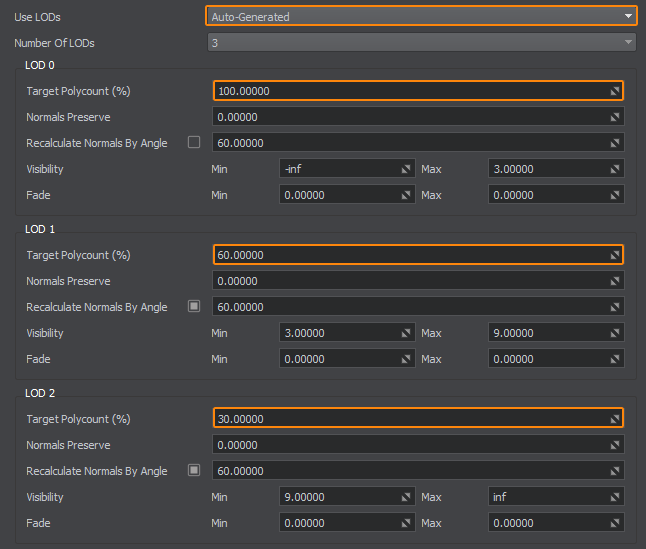 UNIGINE provides automatic assignment and configuration of Levels of Detail based on the name postfixes, enabling you to create and export different meshes for different LODs of your model in a single FBX file. Now, you can specify visibility and fade distances for each LOD of your model at the importing stage, saving time, as you don’t have to adjust these settings for the surfaces on the scene - choose Combine by Postfixes in the Use LODs dropdown. 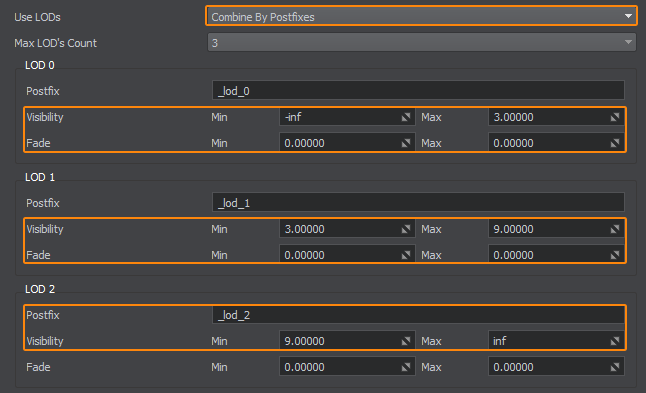 The World Spline Graph works well as a tool for object placement and deformation, but the resulting object has some technical issues making it difficult to use in final applications. So, as a temporary solution, we have decided to implement the function of exporting the spline graph to .mesh and .fbx files to get rid of certain weak points and limitations. 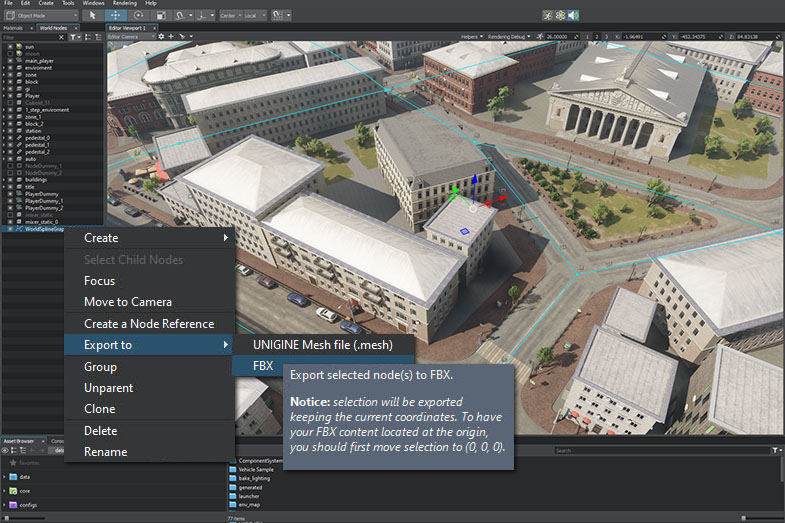 You can export your World Spline Graph similar to objects of other types - via the context menu. The export operation produces unique geometry that you can use in your projects like any other model without any additional restrictions. There are some limitations to be observed, please see the documentation for more details. As for the World Spline Graph itself, you can use it as a tool to create such geometry on the scene right in the UnigineEditor.

Now when exporting geometry to an FBX-asset you'll see an extended set of options giving you more flexibility and enabling you to: 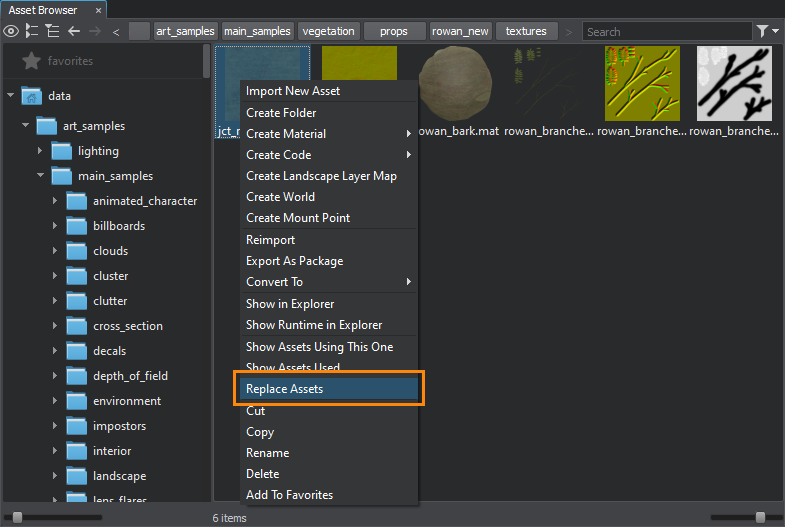 Often, when developing a project you'd like to automatically replace one asset (or a group of similar ones) with another asset of the same type while keeping all references. That might be very useful, for example, when you want to replace certain textures in all materials with a new texture, or when building a prototype of your scene without having the final geometry yet by placing some simple blocks (proxies) to replace them with final models when they're ready. Now you can do it in a snap via the context menu in the Asset Browser simply select the desired asset(s), right-click and choose Replace Assets. All related changes will be made everywhere in your project automatically, with most of the asset types supported, including meshes, textures, materials, properties, presets, landscape layer maps, etc.

Outline for Selected Objects in the Viewport

We've had a lot of requests for this feature recently, so we've implemented it. You can toggle it on and off via the Helpers menu in the viewport.

Decal materials can now be previewed right in the Asset Browser as well as in the Parameters, and Materials windows making the adjustment process for artists significantly more convenient. 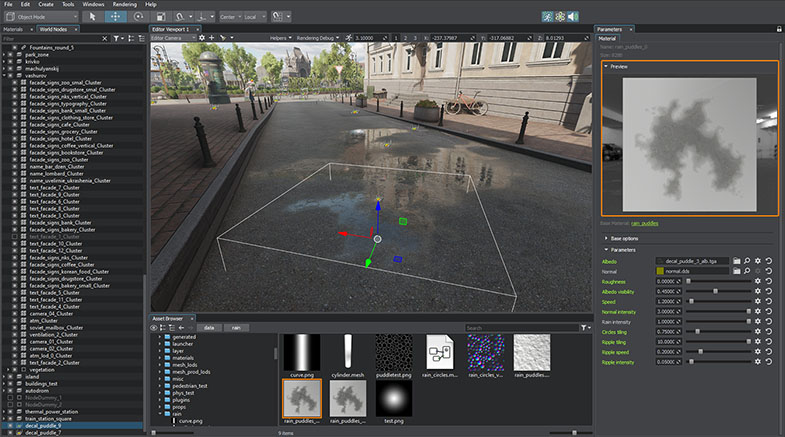 Working with texture preview has also become more convenient with more accurate zooming, preserving the current position when activating/deactivating channels, and camera control in the preview window via the left mouse button and scroll. 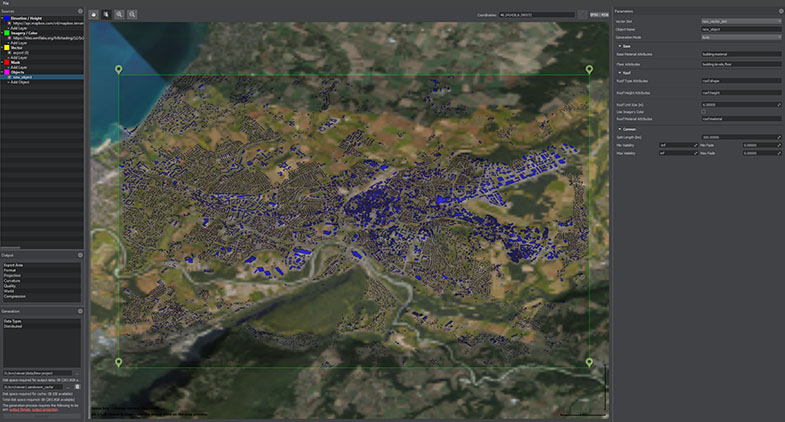 We have added a new add-on containing a pack of materials, to simplify creation of environments. We plan to extend it in future updates and provide you with a rich diversity of buildings, from bungalows and wooden houses to skyscrapers. 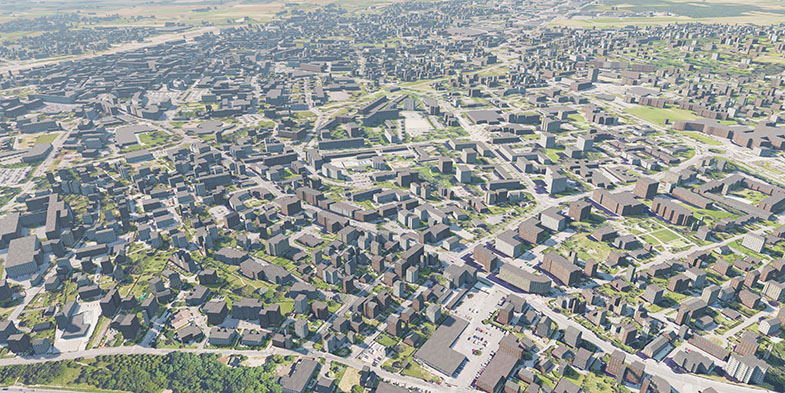 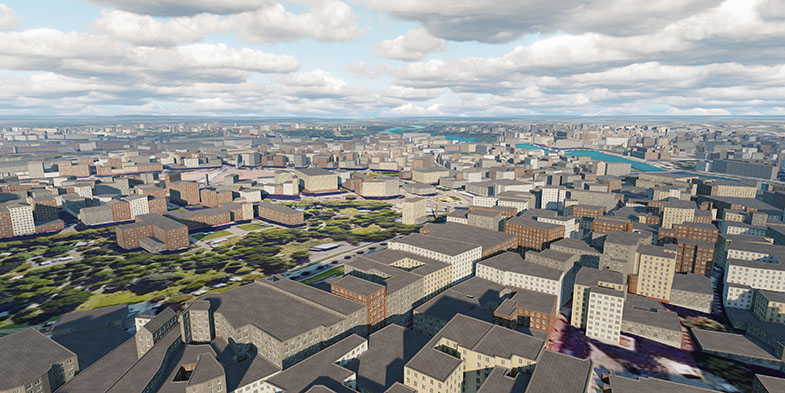 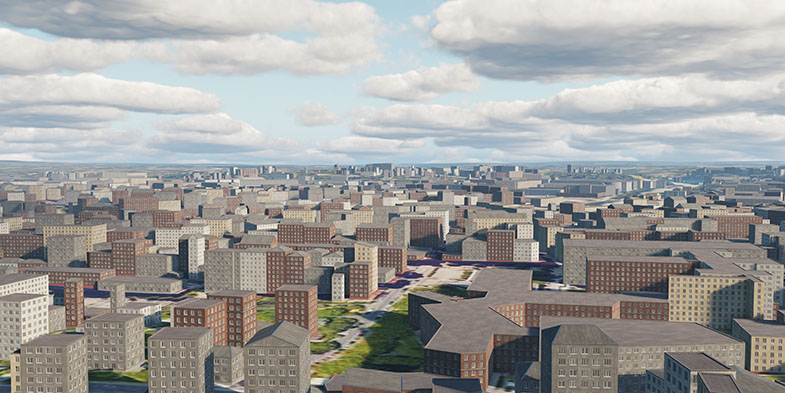 We have removed the Material Graph Samples suite moving all the content to the corresponding section of the Art Samples suite to keep all art-related samples in one place, as well as to optimize assets usage and save some disk space. So, be sure to check Art Samples for graph-based material samples introduced in 2.15, along with a pack of new ones. 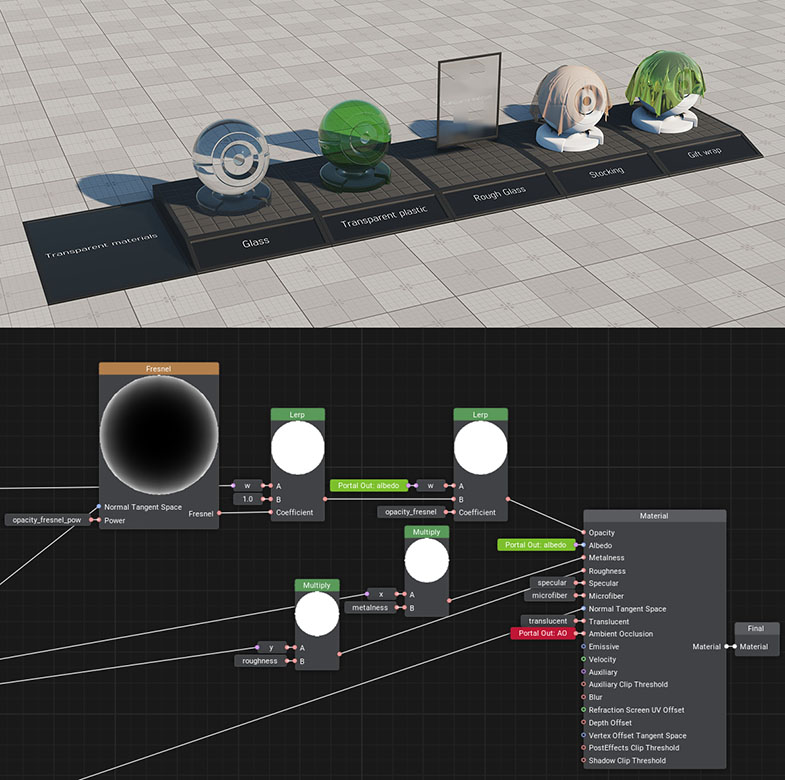 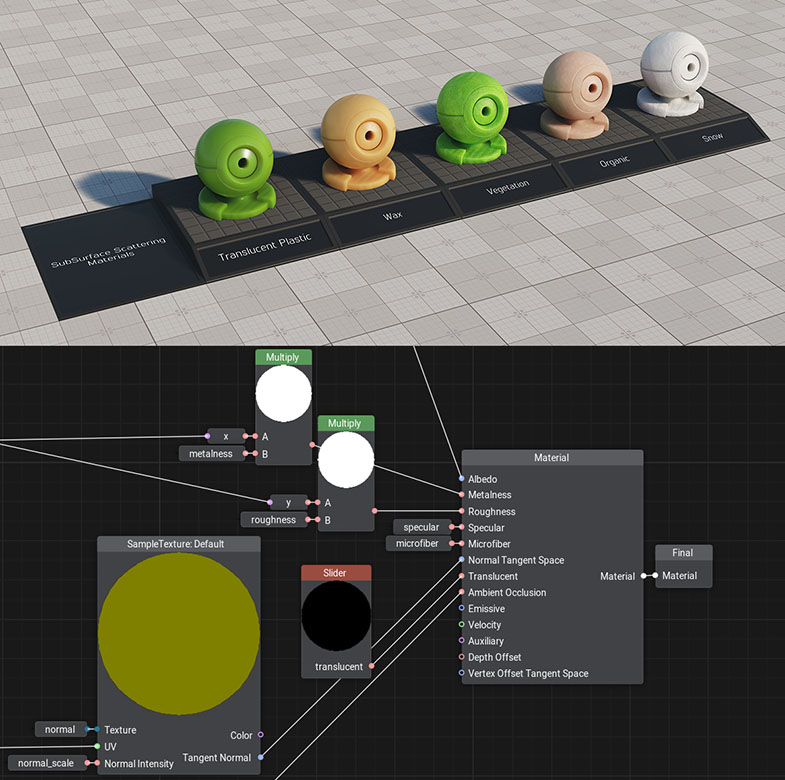 And a new video tutorial on peculiarities of Node References:

Along with a set of new ultrashort HowTo quick tip videos in English, Chinese, and Russian:

Thank you for reading, and stay tuned for future updates - many great things are yet to come!