UNIGINE 2 Sim now lets you create round (ellipsoid) 3D Earth: objects can be placed in geo-coordinates (longitude / latitude / altitude) and visualized correctly even for high-altitude in-atmosphere flight. We also added support for high-res terrain insets that are bent according the ellipsoid model.

You can create a completely curved world, and object physics behavior will be correct (however, it is important to make sure that the gravity vector is directed correctly in different points).

To bend object geometry, create a GeodeticPivot node, make your objects its children, specify settings and click the Make Curve button. At the moment, the GeodeticPivot node works with the following node types:

There are built-in WGS84, GRS80, GRS67, Airy 1830 and International 1924 reference ellipsoids and you can easily add custom geodetic datums (or another planet reference ellipsoid datums). You would only need to specify the semi-major axis, and the flattening coefficient. Yes, that simple.

Our plans for the next releases are:

Terrain material system has been switched to metalness workflow. There's no limit on the number of layers and materials anymore. We reworked the material system and got rid of index textures. 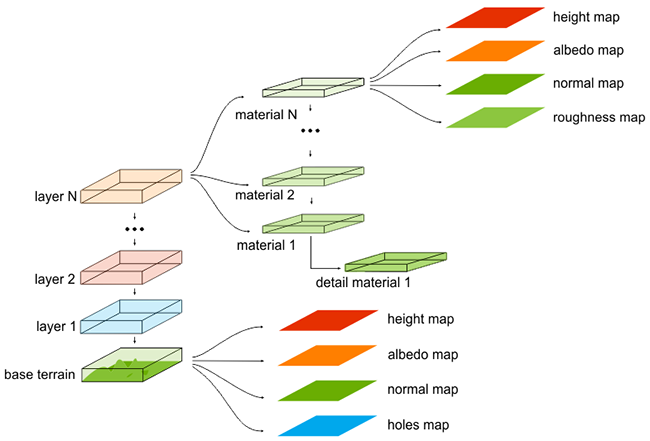 Mask Base logic has been changed to Detail material logic: detail materials use the mask of the "parent" material.

Huge terrains are one of the UNIGINE's key features, so in order to streamline workflow and improve productivity of teams creating them we have completely rewritten the Landscape tool. This experimental tool is available in Sim edition only. Currently it features the following: 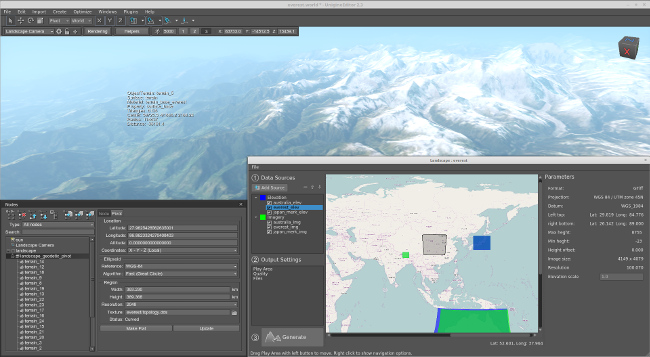 Next iterations of the Landscape tool are going to introduce procedural rules system, which will be used to procedurally refine / generate content based on geo-data (both raster and vector). Also, non-geo data support is planned for 2.4.

Old Landscape plugin for UnigineEditor is still available as well, until the new tool will gain all of its features. 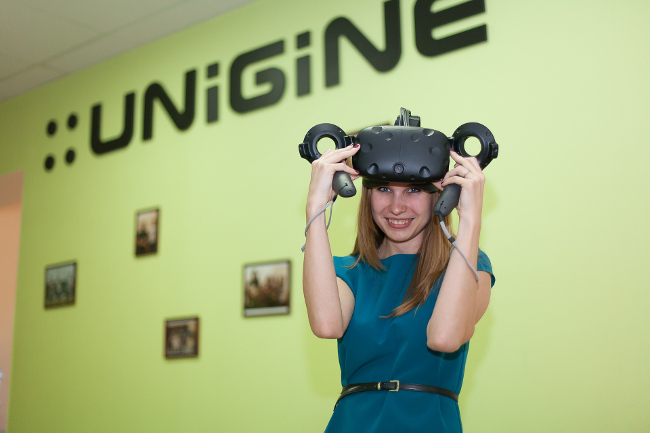 Metalness workflow materials properties are, compared to specular workflow, much closer to the real-world ones. Being based on the real, physical behavior it is thus somewhat easier for content authors to understand. Most of the advanced digital texture creation tools (3D-Coat, Substance Painter, etc.) are switching to metalness workflow these days.

We decided to switch to metalness as well and made a huge internal change in the renderer and shaders with this release. Specular workflow is still supported, but metalness is used by default from now on. Because of that change, UUSL now provides a new GBuffer structure that supports both specular and metalness workflows, as well as methods to convert specular GBuffer to metalness.

In this release we restored SSR support with better visual quality. 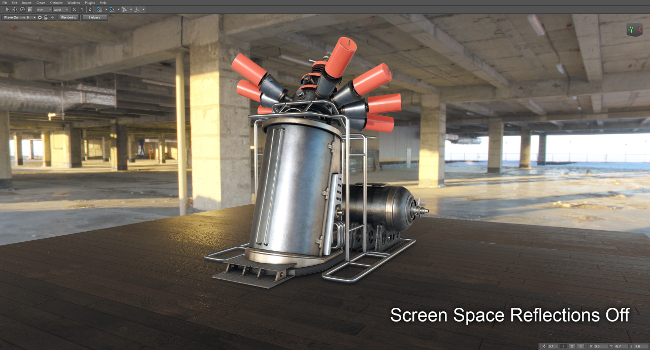 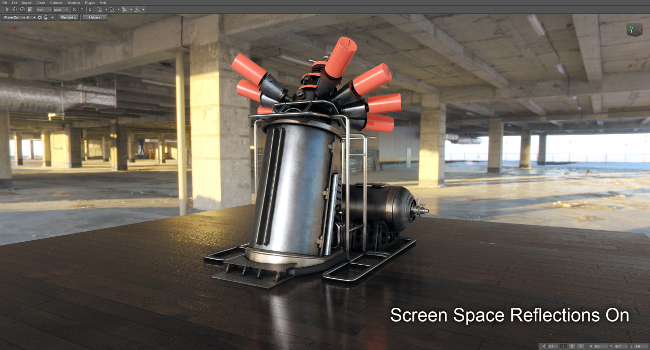 We added GGX mips for EnvironmentProbe cubemaps: when you grab the cubemap texture via the EnvironmentProbe node interface, the engine automatically creates GGX mip cubemaps. GGX mips have better quality and meet all the requirements of physically-based rendering. 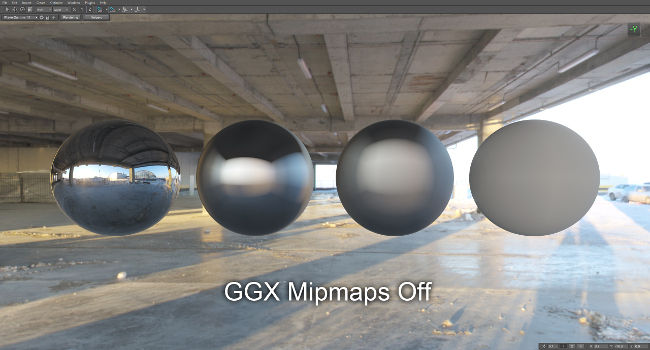 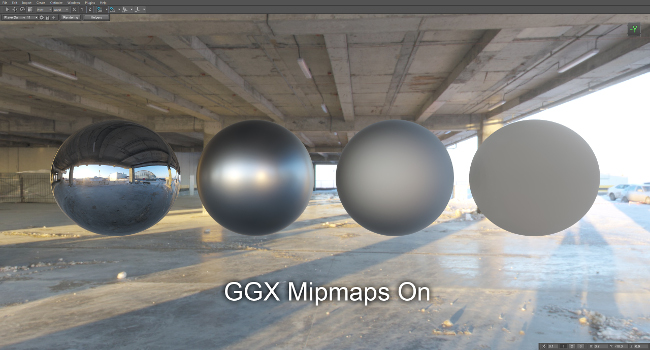 To use this feature in your existing projects, you should re-grab all the cubemap textures for your EnvironmentProbes.

Also, this technique improves the SSAO calculation on surfaces with parallax maps. 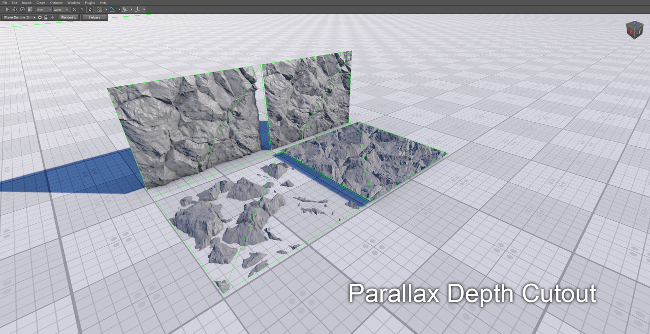 DoF effect has been completely reworked in order to achieve photorealistic effect: 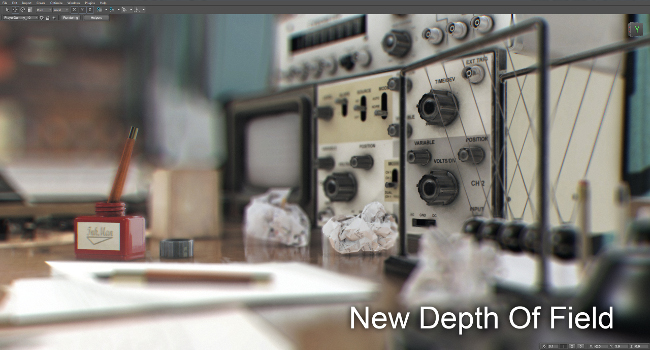 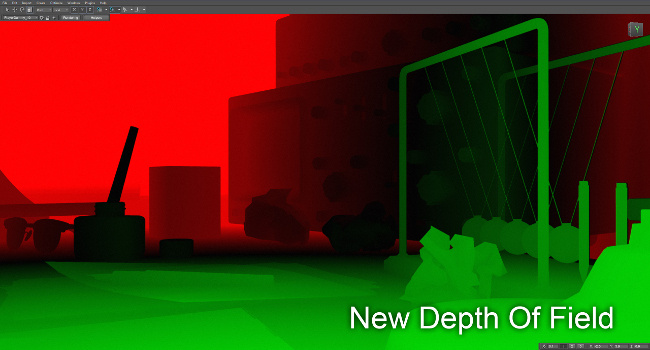 An example can be found in the Samples demo (Camera Effects section).

Those settings let you:

The fact that EnvironmentProbe in UNIGINE 2 can define environment lighting enables reusing it for Global Illumination effects too. In addition to the traditional method of projecting a cubemap onto a sphere, we also provide an optional box projection method (formally, projection onto a cuboid). That works (much) better with indoor scenes (where the rooms tend to be boxes), or box-shaped outdoor scenes (think of a back alley between buildings). Corners are specially treated, too: objects closer to corners are more glossy, that is both more physically correct, and helps fight artifacts.

Note that the effect is mostly visible next to the walls. Moving objects can cast GI light bounces, too; for that you need to enable "dynamic" flag in the EnvironmentProbe (otherwise moving objects will just be accepting the GI bounces from the environment). It is also recommended to use this feature together with SSR to achieve better visual results.

New FieldHeight node with particle systems can provide an effect of a stern wave (when moving vessels leave a long trail on the water) and a so-called bow wave in front of vessels. 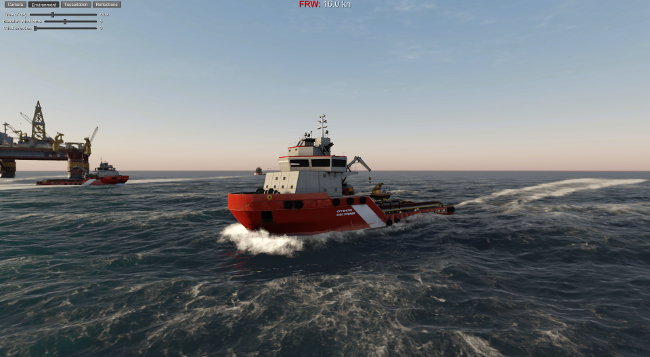 Oil Platform demo provides an example of both stern and bow waves.

By using FieldShoreline, you can create nice swash zones, where waves smoothly fade out right next to the shore. It also adds an effect of wet sand and wet objects on the shore: stones, litter, etc. 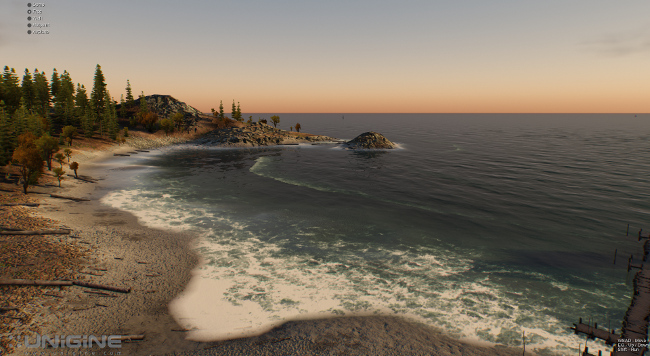 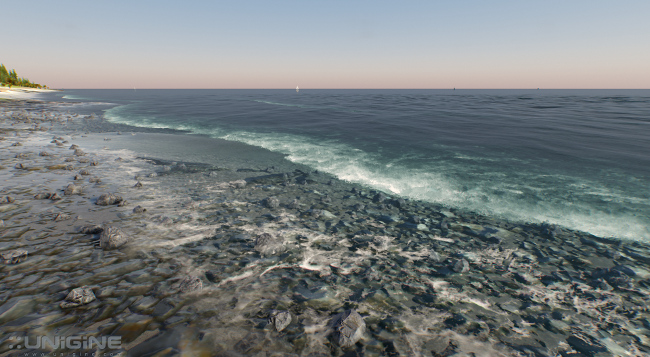 Examples can be found in Port Angeles demo and in the Samples (Water section) demo.

Underwater scenes are now somewhat more realistic, with the advent of the following two changes: 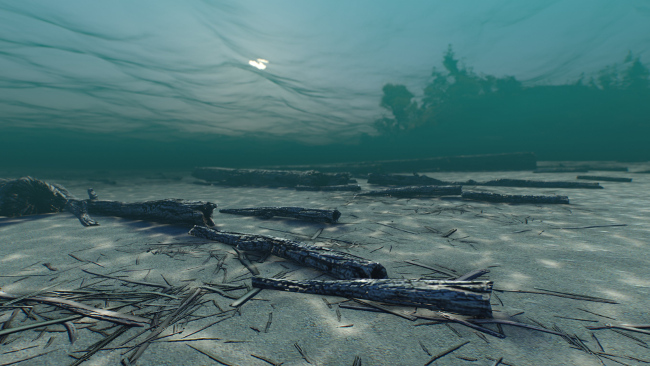 There were a lot of UnigineEditor improvement requests, we heard you, and our Tools Team has been working on a shiny new version for a few months now. Today, we're proud to announce that the core internal subsystems are all done, we have started working on the GUI, and the experimental new editor build is now immediately available to customers starting with the 2.3 release. 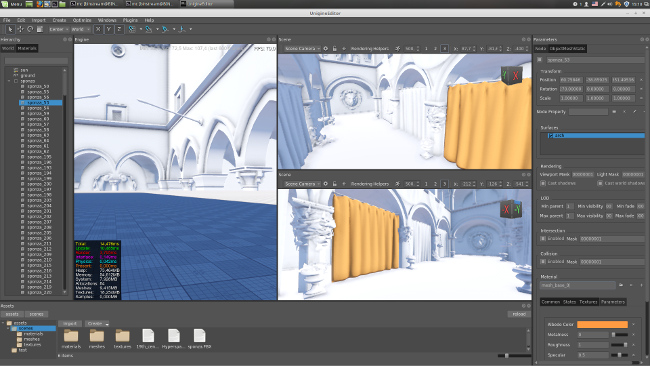 Please bear in mind that this isn't yet a production-ready version, but rather an early technical preview. To try it out, check Options -> Use Editor2 (experimental) in the SDK Browser. Production version will be released along with SDK 2.4.

And the respective new one is:

So as you see, the callbacks are now (partially) type-safe.

Other API improvements and changes:

In order to lower the entry barrier for new users, we started series of video tutorials on basic topics.

Documentation improvements never cease to stop, and the following changes have been made based on your feedback:

Offline documentation is now available via the Knowledge section in the UNIGINE SDK Browser. You can download multiple different versions, as necessary. 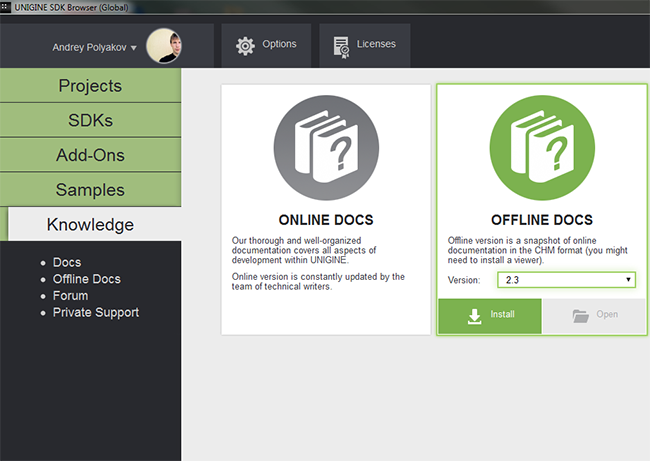