This release brings you more stability and optimization along with a pack of rendering improvements including a new Screen-Space Haze Global Illumination effect, better and more flexible API for runtime importing of assets.

True-to-life haze may be a nice-to-have thing for a game project, but it is crucial for simulation as well as for all projects where visual fidelity is a requirement.

Introducing Screen-Space Haze Global Illumination (SSHGI) - it is a new screen-space effect ensuring consistency of haze color with the current color of Global Illumination. The effect provides realistic result out of the box and has a rather simple set of parameters. This feature is available for Physically Based haze gradient mode only (other modes are planned to be removed in upcoming releases).

The set of SSHGI parameters is available in the corresponding group of Environment settings (Settings->Render->Environment). 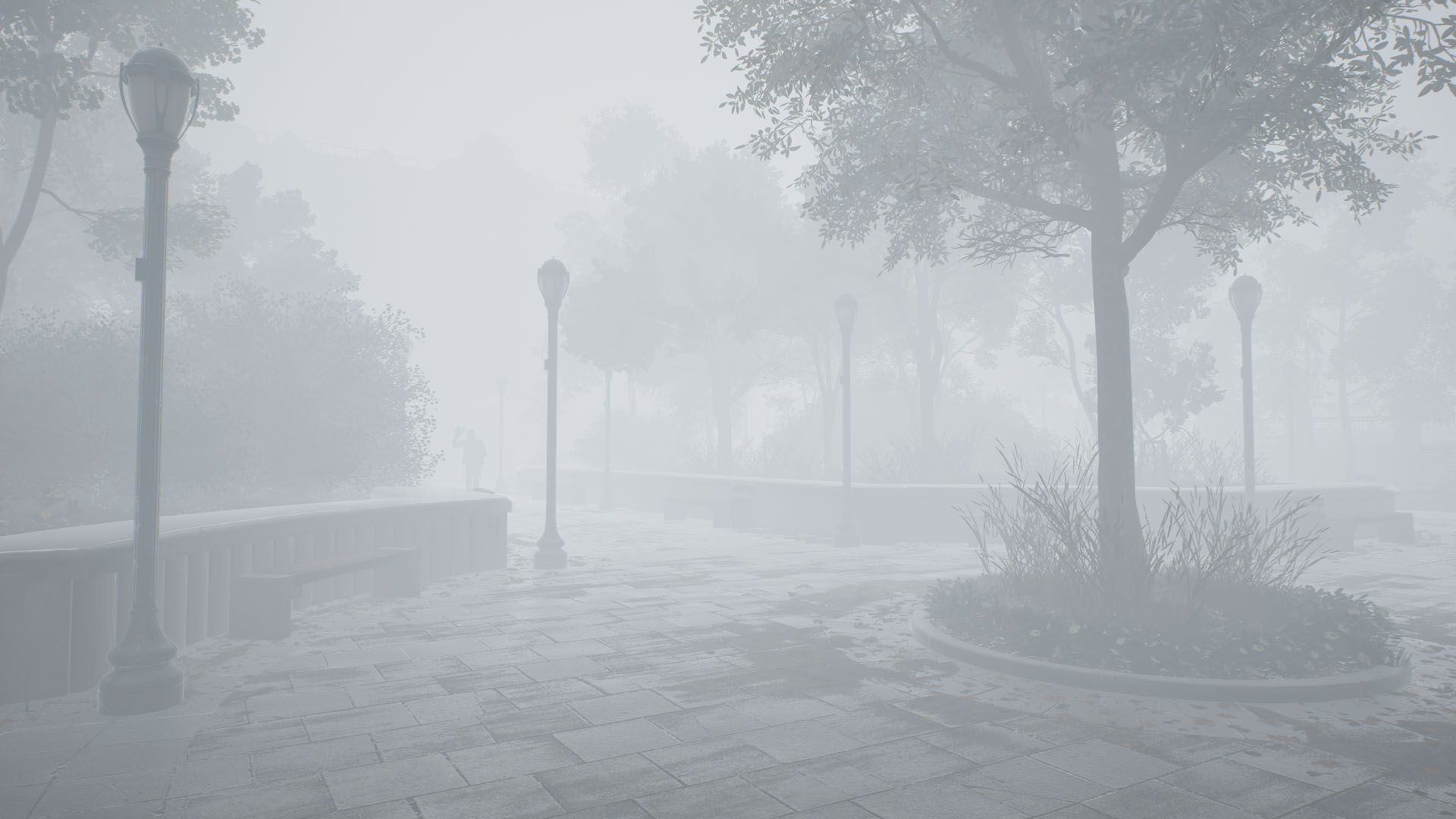 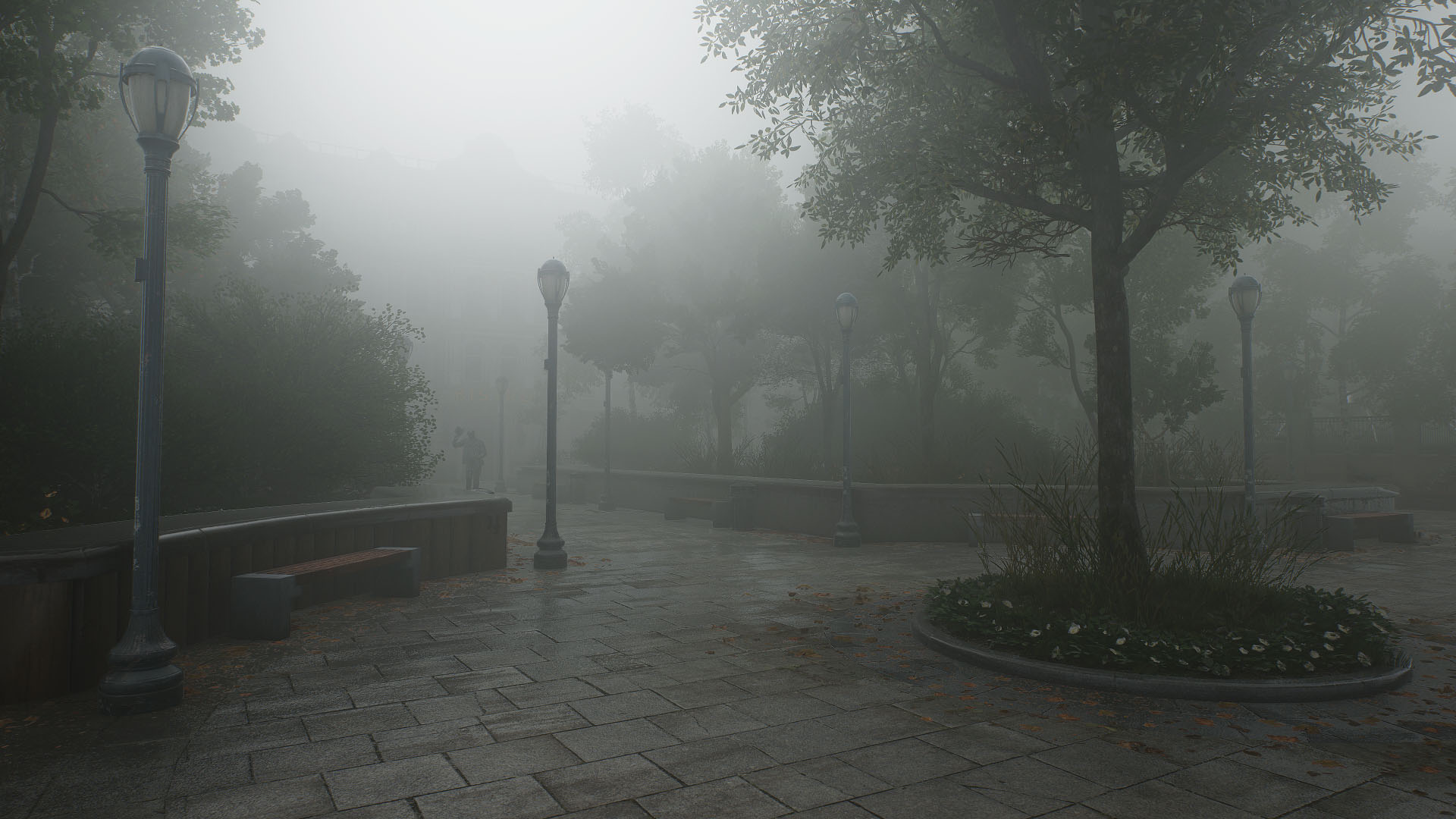 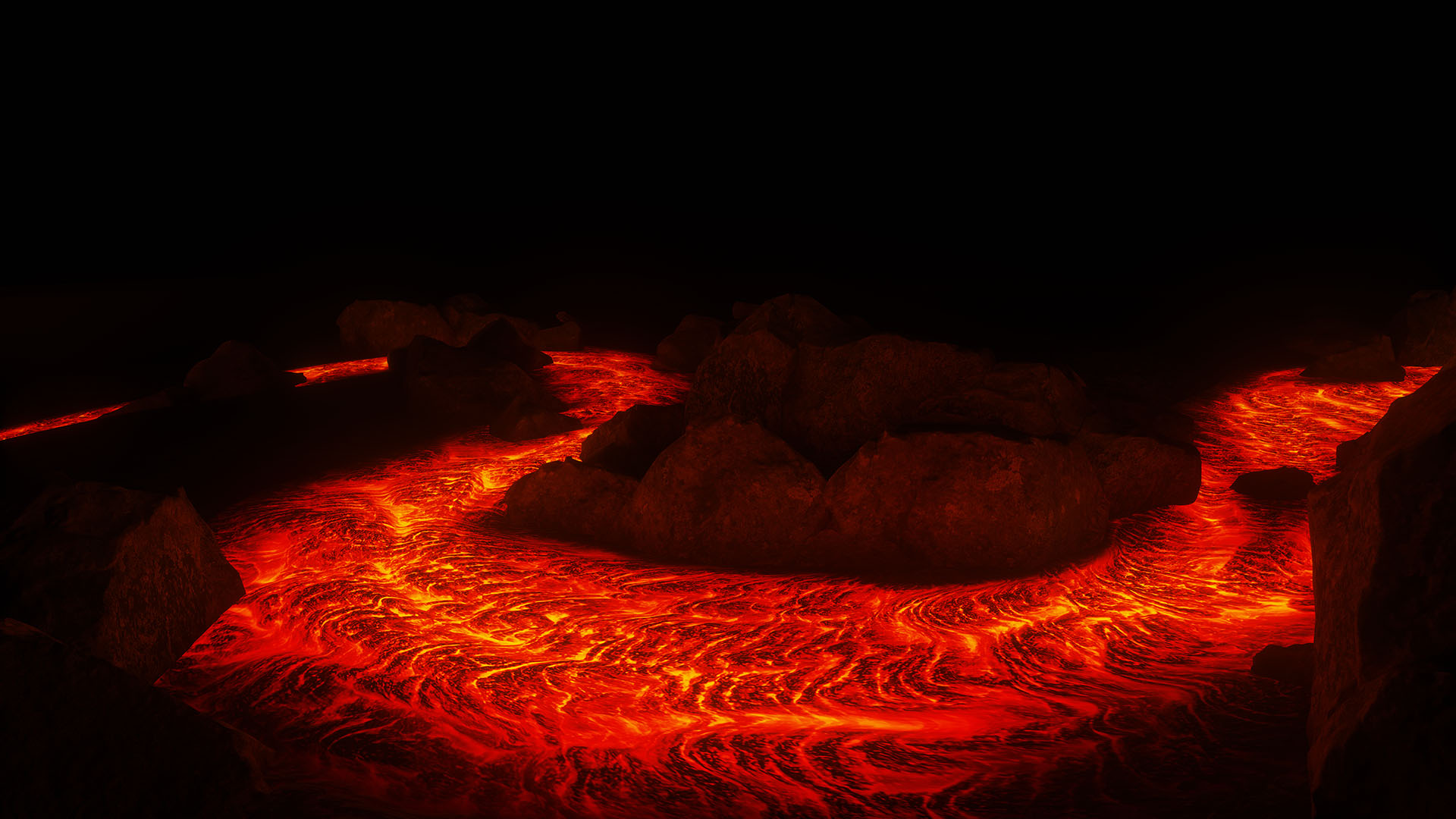 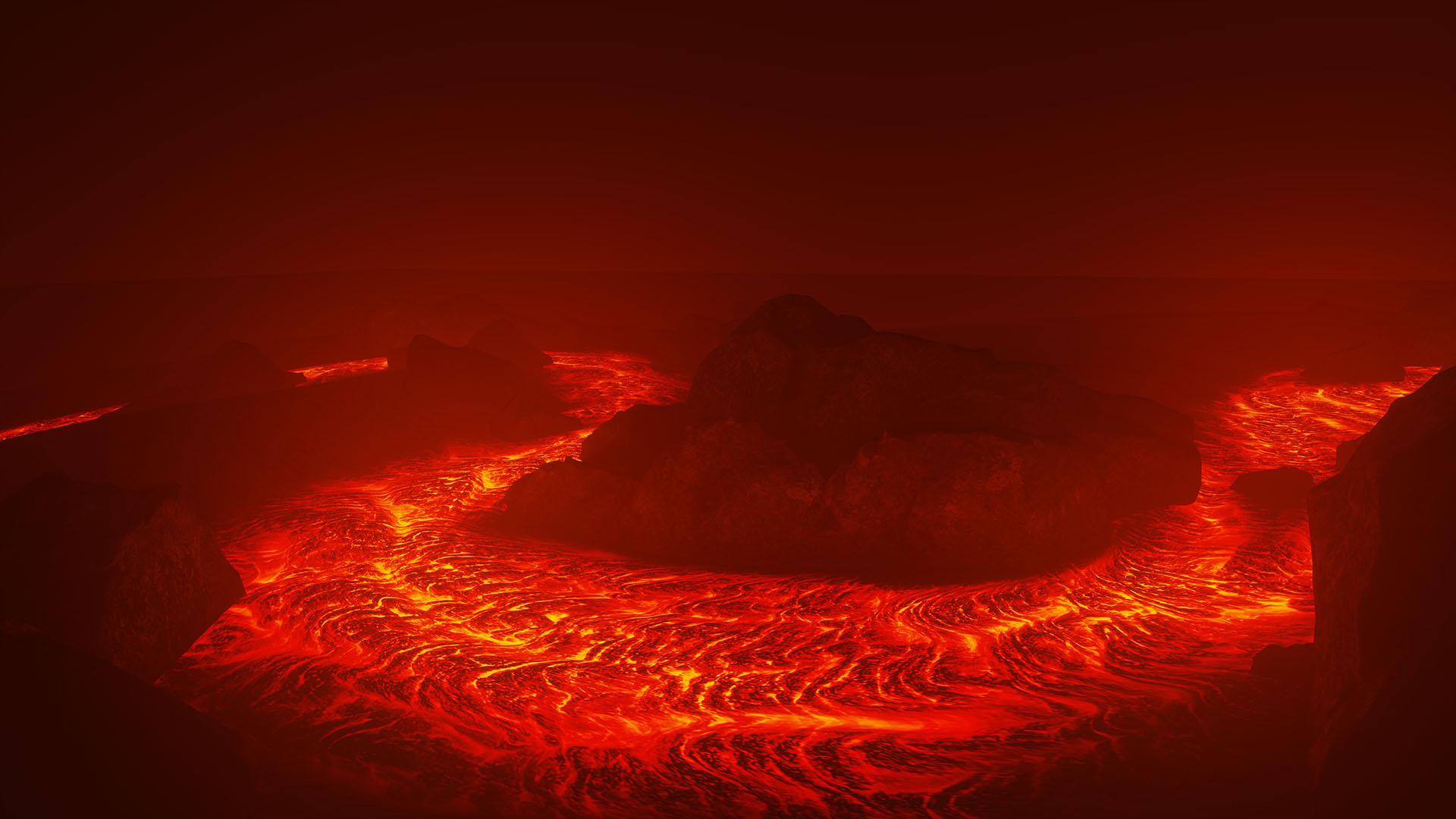 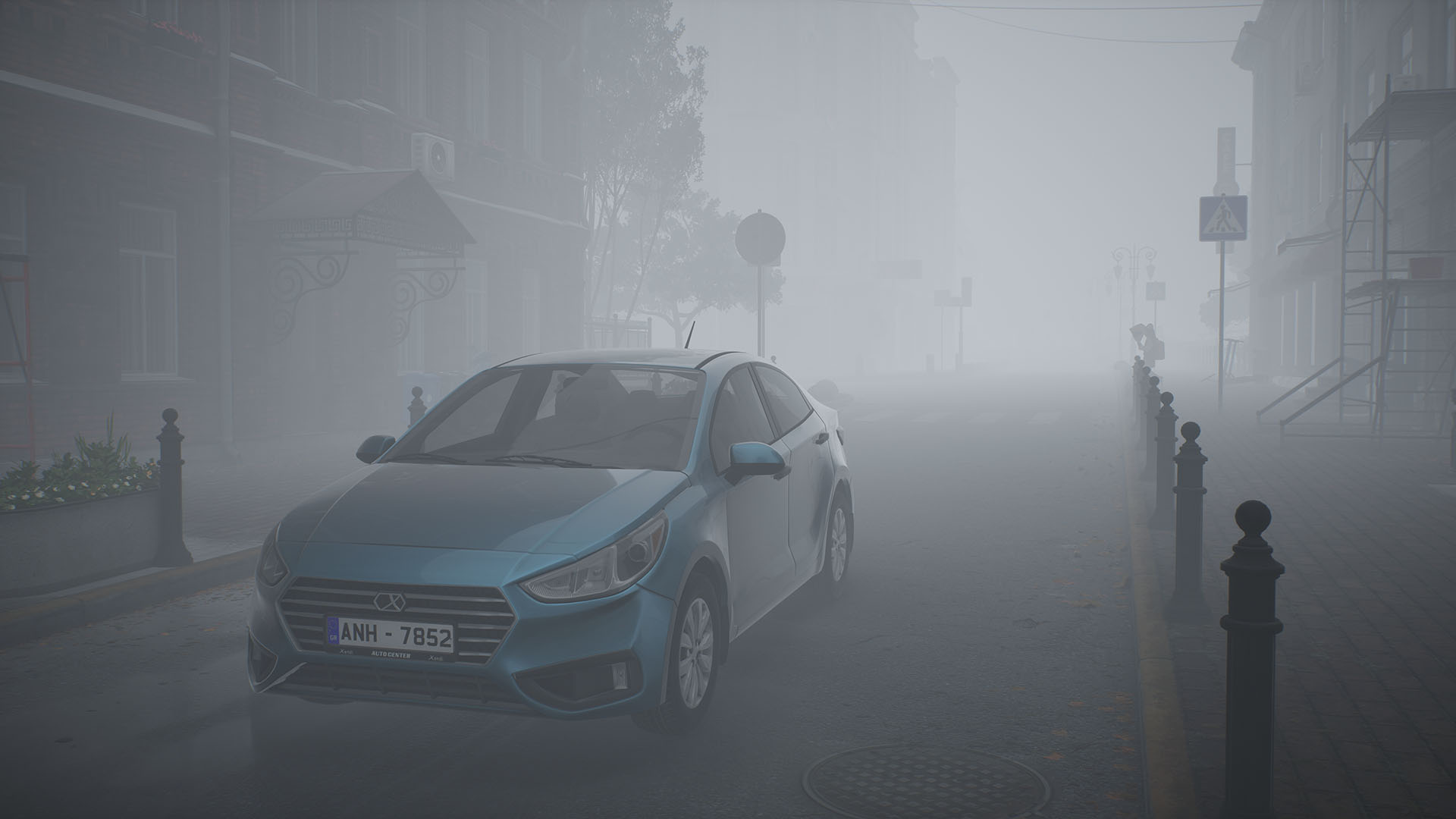 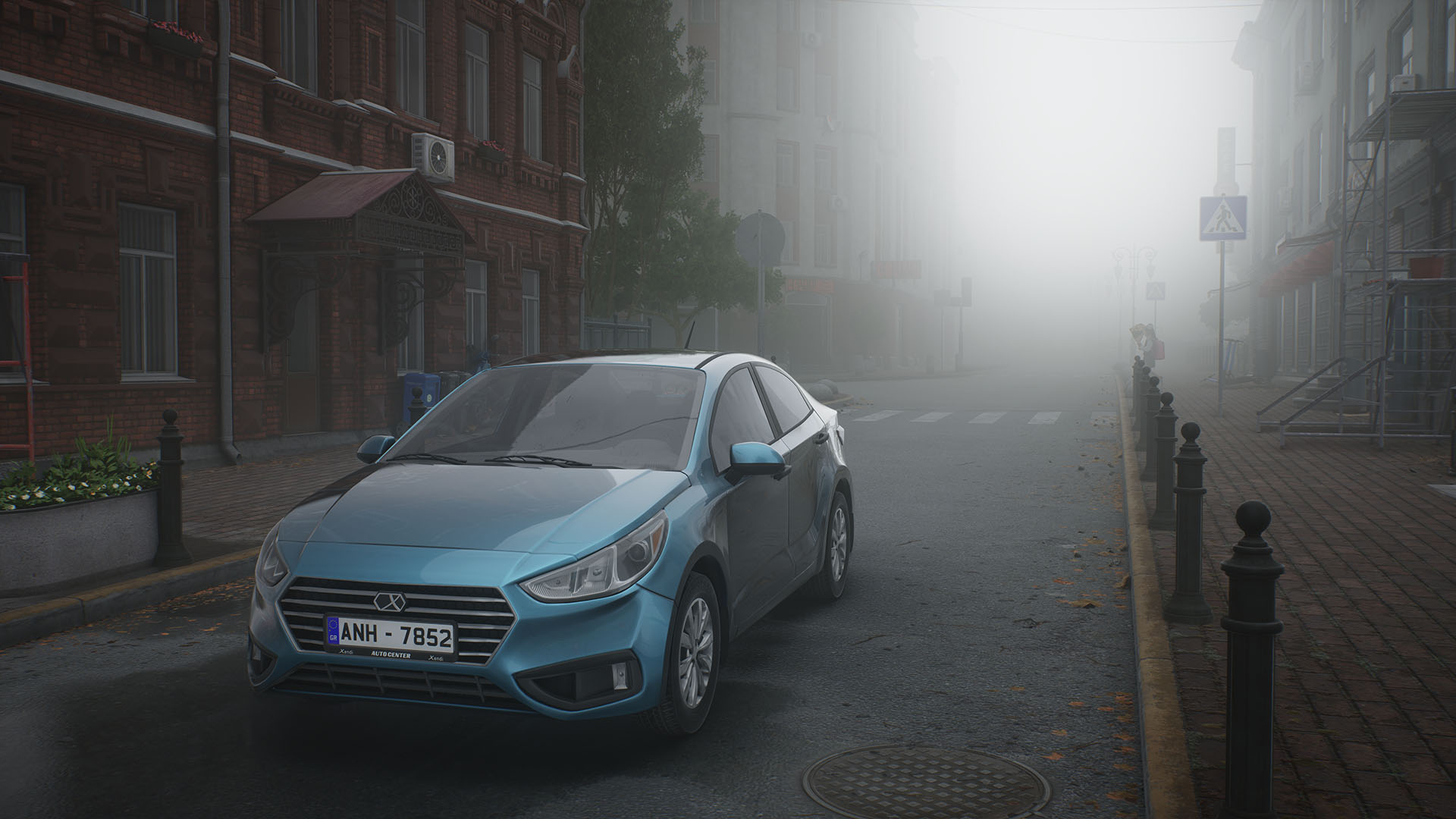 We have refactored and improved import API in order to simplify creation of custom user importers. Now it is possible to register multiple importers from different vendors to be used for importing files having the same extension (importers are now identified by a pair Vendor + Name). You can also set priority for each importer for processing files with the specified extension.

A number of importer management methods were added. Registration of importers has become more flexible as you can specify even creation and deletion methods for each of them:

New API is available for C++, C#, and UnigineScript. For more information on the related changes please refer to the API Migration Guide.

Sometimes, when specular highlights from glossy surfaces get into dynamic Environment Probes a very bright flickering of lighting from it may appear. A new Roughness Offset option (Settings -> Render -> Dynamic Reflections) makes surrounding materials look more matte for an Environment Probe than they actually are, reducing such flickering artefacts. This option is also available via the render_reflection_dynamic_roughness_offset console command.

Added an ability to use advanced culling shadow cascades for Mesh Clusters and Clutters preventing shadows rendered in the nearest cascade from being rendered again in other cascades. This reduces the number of polygons rendered during the shadows rendering pass saving performance. However, in some cases this feature may take more than it gives, therefore it is disabled by default.

When developing XR and MR applications, you may need to mask specific objects to act as a "window" into the real world. This is especially useful if you want to see real-world elements, such as instruments or controller devices, in the virtual environment (like windows in a car simulator, for example).

We have added the support for blending masks to give you full control of the boundaries of mixed reality combining VR image from the user's application and the image from the video see-through (VST). A set of different masking modes is available enabling you to define how dynamic and static masks are treated within a mixed-reality view, including the use of chroma-key setups. Blending mask can be used to extend or restrict the chroma-key mask or to control the depth testing against the estimated video depth.

A number of other improvements were made as well:

All widgets as well as the user interface (UserInterface) now have a lifetime management system similar to nodes. They can be bound to a World (i.e. deleted when you unload one), to a Window (deleted when you close one), or to the Engine instance (deleted on the Engine shutdown). So, you don't have to worry about cleanup when creating your widgets, just choose the most suitable option upon widget creation, and let the Engine take care of the rest of its lifetime. Of course you can choose the old way too and manage them yourself manually.

You can find more information in the API reference for the Widget and UserInterface classes.

We have changed the default key opening the Console adding more flexibility for customization and resolving a number of issues with using it on various layouts, such as German layout (QWERTZ). The default key for the Console remains the same (BACK_QUOTE), but you can remap it to any custom key you want (from the KEY_### values defined in the Input class), plus you can also use a modifier now if necessary (from the MODIFIER_### values defined in the Input class). This can be done via the corresponding parameters of the user config file (data/configs/default.user):

You can specify multiple keys by name or number separated by a comma:

Information about the current version of Engine, Editor, and core might be useful in many cases (e.g., writing own Engine and Editor plugins, checking compatibility in your custom tools, etc.). Version is represented as a four-component number - A . B . C . D.

In case you need version information when compiling your application or for any other purpose without having the Engine running, you can:

Optimized "hot" startup of the Editor for heavy large-scale projects with a lot of content. "Cold" startup - is the first time, when you open your project in the Editor, when validation of all metadata and other operations are performed, all subsequent Editor startups are considered "hot". Optimizations bring up to 30%-35% reduction of loading time. However, there will be no difference at all for small projects: the more content your project has - the more noticeable the effect.

VR output is now available in the Editor via the new VREditorPlugin. It will automatically detect that you’re running the Editor with a VR plugin (e.g. via the -extern_plugin startup argument) and add a new item to the Windows menu enabling you to open a viewport displaying an image from your HMD. Just like in any other viewport, you can switch between all currently available cameras, additional controls (e.g. focus supersampling factor or viewport mode) are added automatically depending on the type of hardware (Oculus, OpenVR, or Varjo).

Improved Validation for Assets and Runtimes

We have improved asset validation mechanism eliminating imperfections that have caused problems in some cases. Like when somebody makes changes to an asset, reimports it, and then commits this asset along with its meta file to a repository without commiting modified runtimes as well. Now you won't end up with a valid-looking asset having an old version of runtime(s), in this case you'll be notified that the asset has a problem.

Cleaner is a tool you use to optimize your project and save disk space by removing unnecessary assets. But there are a lot of runtime-files generated, especially in a big project, and they can be lost as well, eating up quite a lot of disk space (e.g. an asset is deleted, while its runtimes are not). Updated Cleaner tool switched to an upgraded dependency analyzer with an advanced script parser will now take care of them! 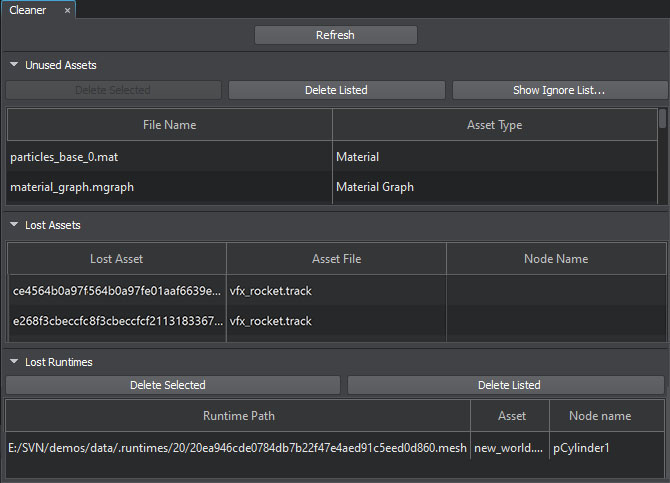 Unused runtimes having no assets are removed automatically during the cleanup process, as well as single meta-files. All cases of using runtimes directly (having no assets, but referenced from somewhere within the project) will be reported. All cleanup actions are logged, so you can track changes and be aware of any dependency issues and potential garbage in your project.

You can find more details in the updated article.

You can now add and assign a component or property to multiple nodes at once. Just select them in the viewport or in the World Nodes window and click Add New Component or Property in the Properties window. Then drag the desired component/property to the corresponding field to assign it. Later you can select several nodes having the same component/property and replace it with another one just by dragging it to the corresponding field or by typing its name in this field.

We have implemented automatic assignment of multiple items in the property array on the Parameters panel via a drag&drop operation. You can select multiple nodes in the World Nodes hierarchy (or multiple materials, properties, assets in the Asset Browser) and drag them to the desired element. In case of an array with a complex structure, items are dropped one by one (excluding those that do not correspond to the field type) into the specified parameter (field) of each array element.

We have improved the layout of widgets and made headers of parameter groups highlighted and seen clearly and we made clearer the structure of nested parameters which is especially important for complex properties/components having a lot of arrays and structure- and array-type parameters. 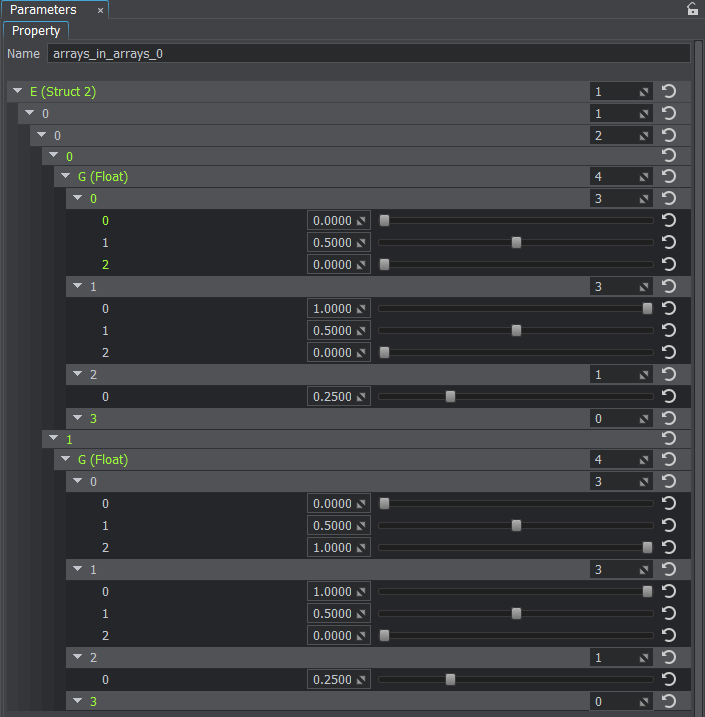 When building worlds it is often necessary to copy certain nodes and paste them somewhere else, within the current world or to another world in your project. We made copying to clipboard available for nodes, you can use it to copy selected nodes, node groups, and hierarchies, enabling you to perform copy-paste operations with nodes within or between the worlds of your project (Ctrl+C and Ctrl+V - as usual). 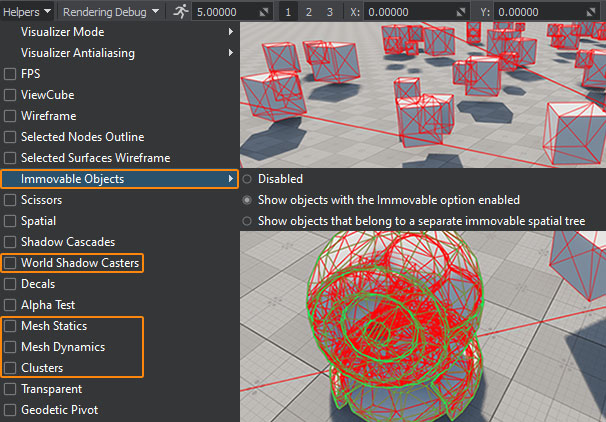 A pack of new helper visualizers has become available in the Helpers menu for various debugging purposes, including:

We have practically all elements of the Editor's interface covered with tooltips, but some things may require a more detailed explanation and examples than an average tooltip can handle. So, now some UI elements of the Editor may have an icon with a question mark next to them - the Help Icon. You can click it to display relevant documentation related to the object it is linked to. We plan to provide more of such icon-links across the Editor's interface to help you find necessary information quickly, in a click.

UnigineEditor now checks version compatibility at startup and ignores all plugins, failing this check avoiding crashes on an attempt to run the Editor with an plugin having an incompatible precision version (e.g. float version of the Editor + double version of the plugin).

To ensure that your plugin is valid you should replace the following line in your custom Editor plugin's declaration in a header file:

You can now assemble custom temporal filters based on UNIGINE's TAA for your post effects created in the Material Graph Editor. Just check the Use TAA option for your Post Effect material and configure your filter using the parameters that appear. 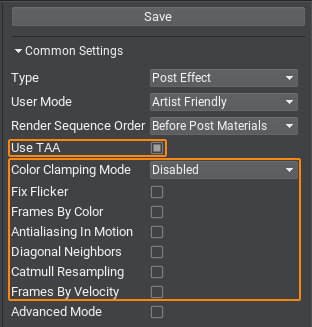 You can also control a set of parameters available in the Temporal Filtering group of the Editor's Parameters window when such post material is selected.

Parameters of your material graphs that were never used (i.e. have no connection to the Material node) will now have an (unused) marker in the Parameters panel. 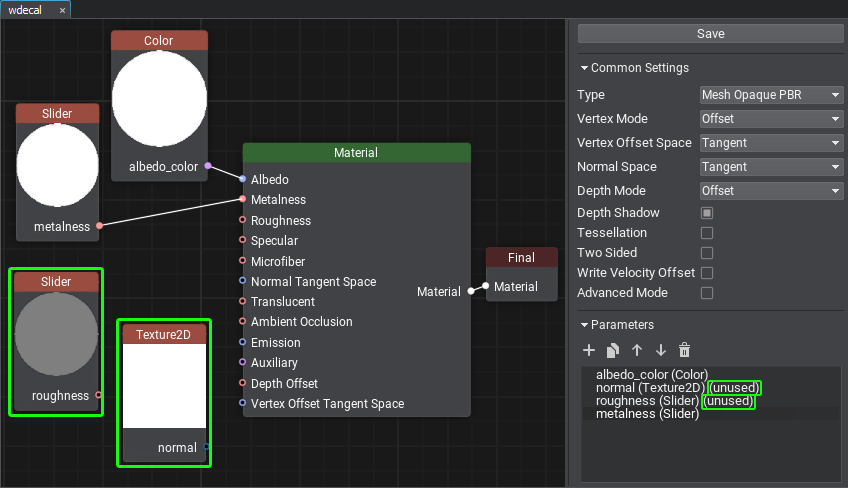 We have made certain optimizations and improvements of ship wake waves for aircraft applications enabling you to create multiple performance-friendly long wake waves for distant views (from an aircraft high above the sea level). To showcase the feature a zodiac_boat node with the corresponding preset has been added to the IG Template. To check it out simply add a Global Water object to the scene and create an entity (type 300), new wake waves will be generated as the boat moves across the water surface. 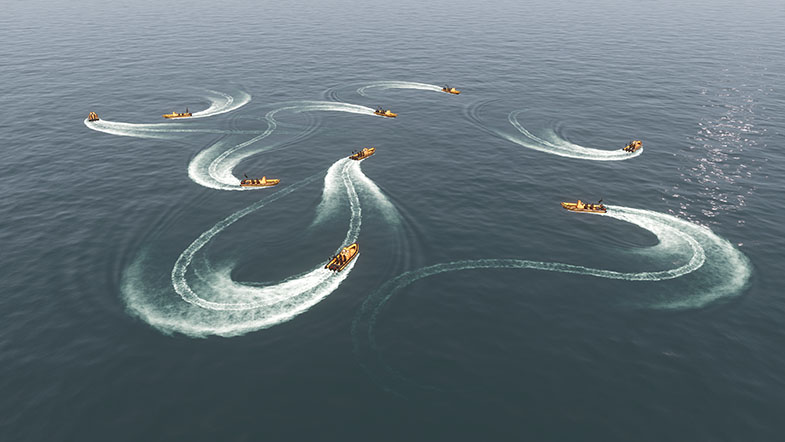 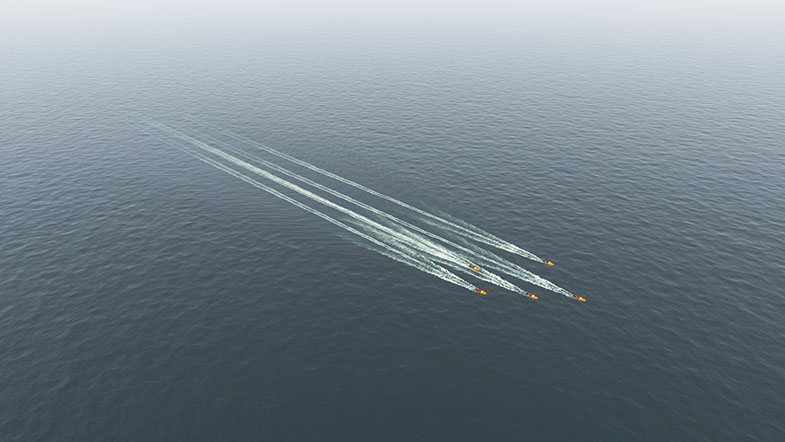 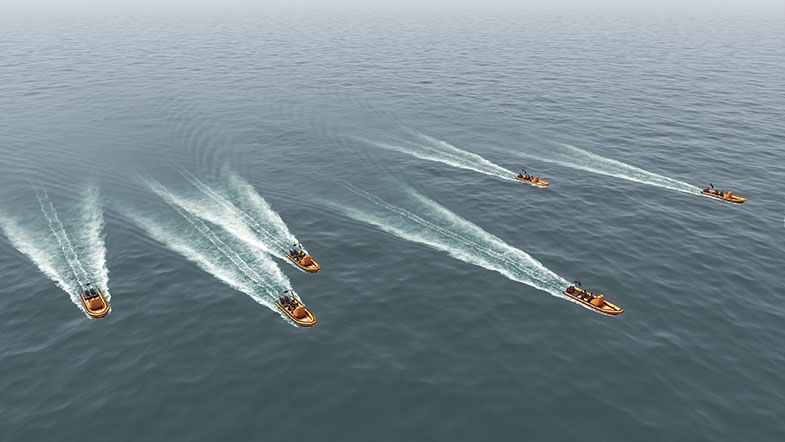 You can now create your own Qt-based plugins on the basis of the VR Template - just select VR Template and choose C++ (Qt-based) as API+IDE when creating a new project. 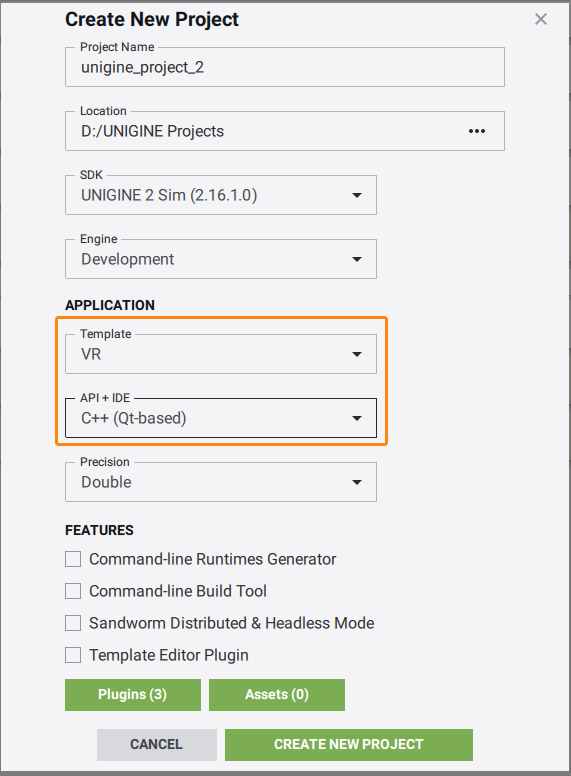 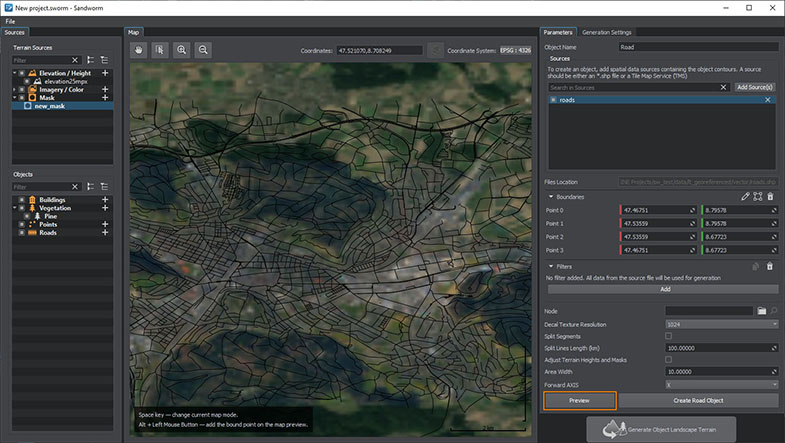 A set of samples has been added to the C++ Samples suite showcasing some typical use cases including the following:

Some of these samples (Top-Down Controller, Cluster, Clutter-to-Cluster Converter, and Target Marker) were also implemented in C# and added to the C# Samples suite. 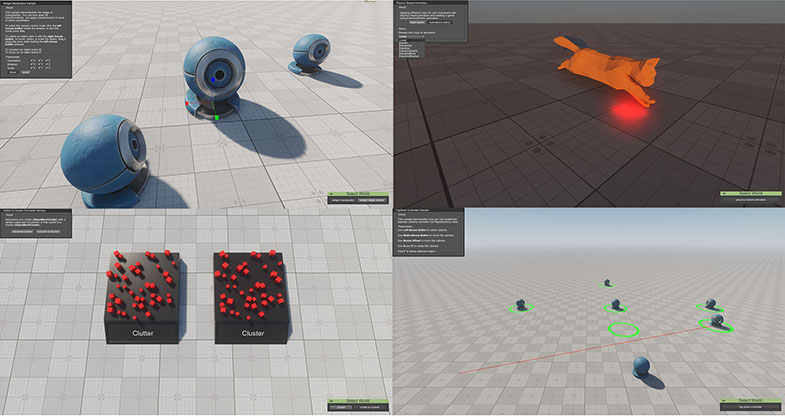 Thank you for reading, and don't miss the updates as we keep working to make UNIGINE even greater!