Schemer is a visual scripting system that allows creation of complex sequences of gameplay events without having to script them manually. This way the artists can add interactivity to the world without the help of a programmer. By connecting paths in a flow graph, it is possible to script cutscenes, switches, timers, changes in lighting and much more. 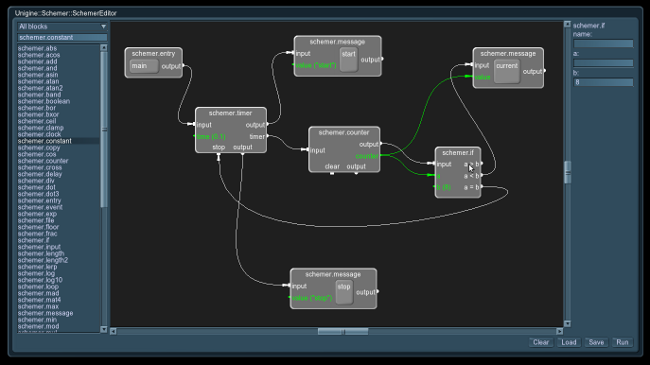 Schemer is written in UnigineScript, its files can be found under data/core/systems/schemer folder. At the moment it's in the alpha stage, which isn't recommended for production use.

Skinner is a visual scripting system for animations. It allows blending different animations together to create complex movements of skinned characters. It also possible to include the physical ragdoll into played animation (for the whole the character or per bone). 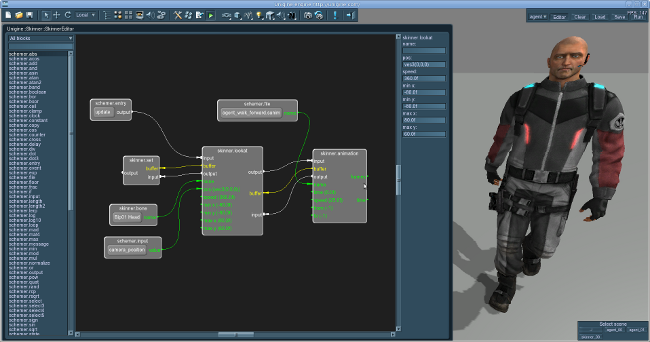 Both Schemer and Skinner systems are parts of upcoming UnigineEditor 2.0, they can work with internal Unigine GUI and external one (Qt-based).

A Scratch project will help you get started with your own Unigine-based game in no time. Tweak and play all using the same application: change settings on-the-fly, see the coded behavior in effect or quit the Editor to go into in-game mode and test how your game feels like. No compilation is required: simply add your models, replace the GUI interface and run the launcher.

A Scratch project can be found in UnigineSDK/scratch folder, read more in the documentation. It is available only for Windows and Linux platforms.

PPS: We have expanded to Europe,new Unigine office is opened in Prague, Czech Republic. Anton Ravin joins the company as the head of European branch after seven years at NVIDIA, welcome aboard!