New allocation policy: by default there are two memory pools (128Mb each), one of them is used for allocations less than 32Kb, another one is for the rest (so by default the engine requires 300+Mb). If these pools are already full, the engine allocates additional 128Mb pool. Plus there are fixed allocators for 2 n memory pieces, up to 128Kb. Memory manager also performs bound checking for allocated memory. Use memory_dump to see current fragmentation map: 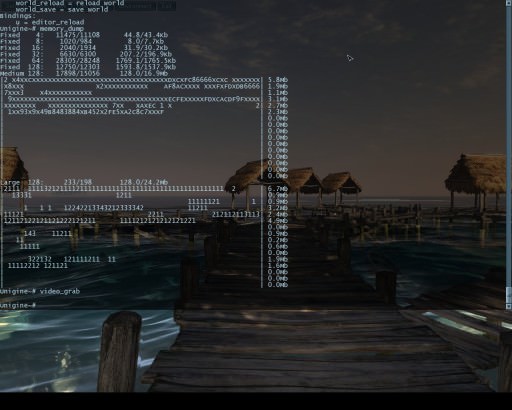 Skinned mesh animation system now operates by tempararily buffers of bone transformations. One can apply different operations to them (copy, invertion, interpolation, multiplication). So these buffers allow creation of complex animation trees. Animation layer can be treated as a CPU ALU and buffers are like CPU registers.

PS: There is a new interview with our customers, who is creating an "Afterfall" post-apocalyptic cRPG basing on Unigine (Polish only, sorry).